We in the modern world have two simultaneous ideas of what the Romans were like.

On the one hand, we like to see them as icons of culture and taste, all posh white men in nice white togas being civilised around lots of white marble – your Ciceros and Senecas and Julius Caesars. On the other, they’re perma-naked sex maniacs, bumming anyone who stands still for too long, murdering on a whim and throwing up at feasts when they get too full so that they can eat some more. Neither is entirely true. Trust me; I’m a doctor (not that kind). In fact, the Romans were far, far weirder that you can possibly imagine, in all kinds of horrifying ways. Here’s ten things you don’t know, some you never wanted to, and some which may interrupt your sleep.

You heard. And it’s exactly as awful as it sounds. Here’s what happened: In 390BC some Gauls invaded Rome, horrible barbaric Gauls who were wearing trousers and didn’t shave and probably smelt. They destroyed much of the city while the poor Romans sat on the Capitoline hill and watched, having been caught by surprise because the city watchdogs didn’t notice the Gallic troops arriving and failed to make a fuss. Instead the alarm was raised by some geese, who were sacred to Juno (don’t question it). The sacking was a horrible shock for the Romans which they never forgot, and so they commemorated it yearly (August 3rd) by taking some representative geese, popping them on a velvet pillow and taking them to see two representative dogs being crucified. Two poor little dogs, splayed and nailed to a cross, to punish them for something that may have happened once. The Romans were a severely unforgiving lot.

2. The Romans Were Super Religious

There’s a still popular strand in Roman history that likes to pretend that the Romans didn’t really believe in their own religion because it looks completely dumb. But this is rubbish, because of course they did. Why else would they bother with all the endless, exceptionally complicated rituals? And believe me, there were a LOT of deranged, complicated rituals. For all your high minded 19th century ideas of fancy togas and civilisation, always remember that the Romans based half their policies on what sacrificed animal livers looked like and the other half on what some birds were doing at any given time. At particularly difficult times, they would consult some old scrolls called the Sibylline Books for policy. Once, after a defeat by Hannibal, the books told them to bury 4 people alive bang in the centre of Rome. They did it. Fun guys. 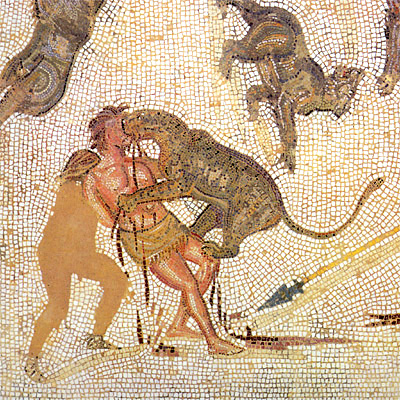 3. The Romans Liked to Use Animals in Punishments

I know what you’re thinking right now: feeding Christians to the lions. Well I’m sorry, but I’m here to break the bad news: there’s little to no evidence that that ever happened. Maybe once. Maybe. But Roman law did have a much better punishment recorded, for the most serious of Roman crimes: killing your father (fathers are a Big Deal in Rome). If you were tried and convicted of killing your father you were stripped, whipped and stoned “until there was no difference between flesh and blood“, then your sad little naked body was sewn into a sack with a dog, a snake and a chicken and flung into the River Tiber to either drown or be torn apart by terrified animals! Yay!

Imagine you’re a nurse, who has maybe cared for your young charges for many years. Possibly, you are their primary caregiver. And maybe one of the girls in your care is reaching adulthood, is 13 or 14 and meets a boy who likes her, and she likes him. Maybe you turn a blind eye to some clandestine meetings, let her harbour a little fantasy of marrying this boy, maybe you even provide some cover for their little romance. Doesn’t that sound nice? Romantic? A little Romeo and Juliet? NO NO IT DOESN’T because if you’re caught doing this you will have molten lead poured down your throat until you die, which will likely be quickly but HORRIBLY.

5. Romans had the Best Religious Festivals 1: The Lupercalia

The description of the Lupercalia – an annual festival held in February – is so ridiculous that its worth acting out as you read this. It all starts in a special cave on the Palatine, where priests of Lupercus would gather and take of all their clothes (stop thinking what you’re thinking, filthy bastards) and drape themselves in goatskins to sacrifice two goats and a dog. They would then smear the sacrificial blood on the faces of the youngest Luperci, which was then wiped off with wool soaked in milk. After this they would have to do a ritual laugh. HAHAHA. Like that.

Then, they would all cut the goat skin into thongs and go running around the city – naked but for the goatskins – whipping anyone they came across with the thongs. People would crowd the street to be whipped. Being whipped was said to be good for fertility and childbirth. Imagine the looks on the faces of the offseason tourists. And please don’t imagine this as some kind of weird ‘early Roman’ thing that Cicero would have no truck with. It continued until Christians banned it in the fifth century AD.

6. Romans had the Best Religious Festivals 2: The Saturnalia

The Saturnalia is the one that boring people say the Christian’s stole and turned into Christmas, as if having a big party with lots of food and gift giving in the middle of winter is a unique idea that only one religion could have come up with. The central part of the Saturnalia is the deliberate overturning of social norms. Various shocking things were done as a matter of ritual: such as performing the sacrifice with the priest’s head uncovered (gasp), allowing free speech (Imagine!), gambling (faint) and – most shockingly – slaves were served dinner by their masters in what I can only imagine was a display of unbearable awkwardness and pain for the slaves, and pure, uncomfortable hilarity for the masters. Please note, the slaves still made the dinner and cleared it up.

However, the absolute best thing about the festival is that it was traditional to punctuate sentences around this time with the exclamation ‘IO’, pronounced ‘YO’. The Romans knew how to party, yo.

Roman jokes often veer from the incomprehensible to the horrifying. None of them are funny. The Romans are not a funny people (unlike the classical Greeks, who had a great line in dick jokes). This joke comes from the 4th century. I think I know what it means, but if I do, it’s chilling: “ When a student produced a child by a slave girl his father advised him to kill the infant, But he replied, “When you’ve first buried your own children you can then tell me to get rid of mine.” Hahaha-no-wait-OH-GOD.

Romans thought trousers were literally the ‘gayest’ thing ever. And Romans didn’t like gay things. Not at all (why else do you think every single “bad” Roman emperor is accused of having sex with men?). When they first encountered Gauls wearing trousers, I like to imagine that they all fell about laughing at the what they considered to be the most effeminate item of clothing imaginable (Romans also hated women). They thought they were not just girly, but dangerously so. Akin to such corrupting luxuries as the wearing of too much jewellery, purple things and dinner parties that were too expensive. And so, like all these things, trousers were at at various times banned in the city of Rome.

9. The Roman World Was Covered in Dicks

Romans put penises everywhere. Everywhere. On children’s jewellery, on the walls, on pendants and earrings; they had statues of penises, they made them into wind chimes and comedy gifts. My favourite object in the history of the world is in an obscure case in the British Museum. It’s a pendant of two anthropomorphised penises – with faces and hands – holding a double ended saw, cutting in half an eye. I want to steal it and own it and show it to everyone I encounter forever.

The reason Roman babies had little tiny rings with cocks on them is that penises were considered a good luck charm, and to ward off curses. This is also why the Romans never told a good dick joke. But imagine that ladies; a world quite literally covered in dick pics.

Of course they did, I hear you cry, they had gladiatorial games! They liked – as a form of general entertainment – to watch enslaved men be forced to murder each other in front of a baying crowd of their captors! But there’s more! Like the fact that they used to drink the blood of fallen (aka dead) gladiators as medicine. It was considered especially effective if it was still warm, so vendors used to drain the blood out immediately after the body left the ring so as to sell it as quick as possible. Oh Romans, you vile creatures you.

10 Awful Fucked-Up Facts About The Romans

2 replies on “10 Awful Fucked-Up Facts About The Romans”

They were fucked up evil fuckers, bit one day they’ll day the same about the things we do.