Despite being an advanced species and civilization, humans are still wired to be afraid of certain animals. Predators like sharks and lions, creepy-crawlies like spiders, and pretty much everything in Australia elicit the “fight or flight” response in us.

As if we don’t already have enough reasons to be wary of these animals, here are 10 crazy facts that make some naturally ferocious animals even more terrifying.

10  Sharks Use The Sun To Hunt 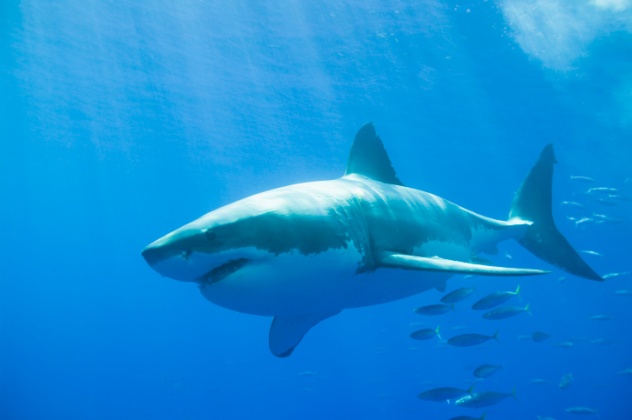 Since 1580, sharks have attacked over 2,700 people and killed nearly 500. In numbers alone, this doesn’t seem so bad. Consider the fact that you’re 10 times more likely to die from just being in the water than at the metaphorical hands of a shark. Yet, we’re still terrified of these toothy, aquatic predators, which can grow up to eight rows of teeth and can bite down with a force of up to 1.6 tons. New research shows that sharks—specifically great white sharks—are also smarter than we probably give them credit for.

A research team observing great white sharks hunting off the coast of South Australia noticed that the sharks changed their approach based on the time of day. It turns out that sharks are not only great predators, they’re smart ones, too. These sharks use the Sun to their advantage while hunting. The sharks positioned themselves with their backs to the Sun while hunting in the morning and evening to reduce the glare and improve their view of the hapless prey, as well as to make themselves harder to see against the sun. Let that be a lesson to you: If you must go swimming in Australian waters, do so on an overcast day.

If at the mention of catfish, you picture the cute little ones you’d find in a home aquarium, you’re in for a surprise. Catfish can be anywhere from the size of your thumb to the size of a grizzly bear. You have nothing to worry about, though, since catfish generally don’t hunt humans . . . yet. Just stay away from the shoreline of the Tarn River in western France, where some European catfish havedeveloped a taste for birds.

These large fish swim up to unsuspecting birds, slowly stalk their prey until they’re almost leaving the water, and then lunge at the birds, dragging them back into the water in a manner similar to alligators. In one instance, out of 54 attempts to grab lunch on the go, 15 were successful.

Even more interesting is the fact that pigeons standing still by the water were ignored by the catfish, even if they were right next to them. This suggests that the catfish didn’t see the birds, but felt their movements rippling in the water. So just remember: It can’t see you if you don’t move. 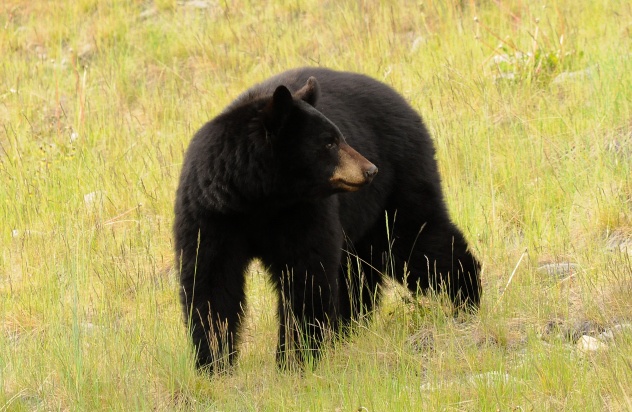 Even if you live in a city far from the furry paws of bears, you probably know this advice: If you’re attacked by a bear, play dead. In reality, it’s much more complicated than that. Playing dead only works with grizzly bears. If you’re attacked by a black bear, you’d better fight for your life and get as far away as quickly as possible. Or, better yet, avoid the confrontation entirely.

That is, unless you’ve been in the bear’s sights for hours. It turns out that the black bears most likely to attack are not the mother bears protecting their cubs—those only act threatening to get you to go away. It’s male black bears who think you might make a tasty treat.

According to Dr. Herrero from the University of Calgary, you might not even see the bear coming. “It’s quiet,” says Herrero. “It stalks you just like a lion might stalk you.” Once a bear has decided you’re its prey, it might quietly stalk you, sometimes even crawling in the brush, circle behind you, and once it’s close enough, charge at the speed of a horse to land the killing bite. When a black bear is trying to eat you, playing dead is probably not the way to go.

7  Spiders Use Their Natural Predators As Bodyguards 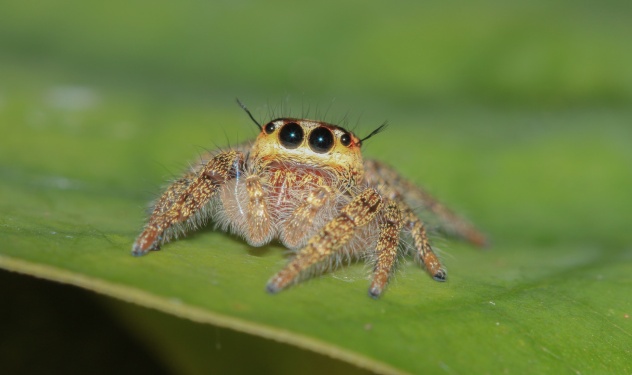 Many people are afraid of spiders, and for good reason. Many spiders are venomous and can hurt or kill a person. The most venomous of these is the Brazilian wandering spider, a nearly 18-centimeter (7 in) beast of a spider with venom so potent that barely a fraction of a milligram can kill a mouse.

When you can’t rely on a fierce bite, though, some spiders resort to just being cunning, like in the case of one little jumping spider. Everyone wants to eat this little guy, including weaver ants and another kind of spider, the spitting spider. (Add “cannibalistic” to the list of reasons that spiders are terrifying.) The spitting spider will literally build its home above the jumping spider to make grabbing these little morsels easier.

Unhappy with his upstairs neighbor, the jumping spider has developed a special kind of friendship with the predatory weaver ant. Namely, the spiders have employed the ants as their personal pro bono bodyguards. Spitting spiders will stay away from weaver ants, so the jumping spiders have learned to make their homes above weaver ant nests, fortifying them to keep their bodyguards from turning on them. This would be something like building our homes suspended above lion dens to protect us from bears. 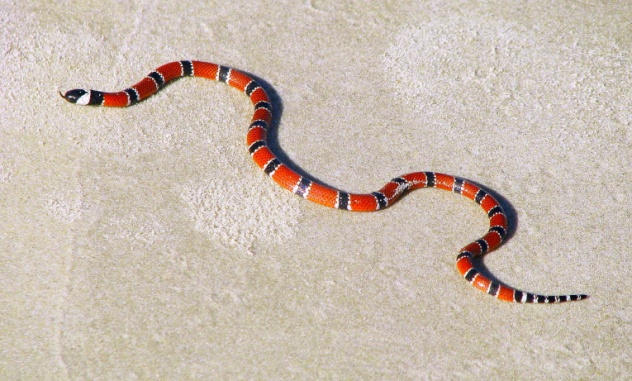 There are over 600 venomous snakes in the world, and unless you live in the northernmost (or southernmost) part of the world, there’s a good chance you’ll run into at least one. If you’re ever bitten by a venomous snake, there’s a nice, long list of symptoms associated with the poison now coursing through your blood. While the specific reactions depend on the type of snake, symptoms include dizziness, fainting, numbness, and blurred vision, to list only a few. Most of these are what you’d expect, or what TV and movies have taught you.

However, a certain kind of snake venom, found in a rare kind of coral snake, had stumped scientists for its unusual effect: It causes seizures. Researchers finally managed to understand how the venom works in February 2015. Toxins in the venom bind to nerve receptors much like other snakes, but instead of causing numbness, they cause violent convulsions. In fact, these toxins are so good at causing seizures that scientists are now using the snake venom to understand how to stop seizures and potentially treat epilepsy, a bright side to a terrifying thought.

Vampires have always been a symbol of sex, from Bram Stoker’s Dracula to the more unhealthy kinds of sexual desires in the Twilight Saga. Despite the glamorization of vampires in pop culture, there is nothing sexy about the vampire bat.

Vampire bats hunt under cover of night, drinking the blood from livestock in such an effective, mosquito-like manner that the unwitting prey is sometimes not even aware of it. Although vampire bats greatly prefer cows and pigs, they have been known to dine on humans when other food is scarce.

Vampire bats are fantastic flyers, but they have another ace up their little sleeves—they can run. In 2005, some researchers put vampire bats on treadmills for science. After a certain speed, the bats got down on all-fours and broke into a gallop, reaching a top speed of 7 kilometers per hour (4 mph). Vampire bats are mammals, so it makes sense that they have this kind of locomotion in their genes, but it doesn’t make it any less terrifying to have a bloodsucking creature of the night chasing you like a small, lopsided horse.

Scorpions are right up there with spiders in the “most terrifying many-legged creature” category. In fact, nature has even merged the two arachnids into one terrible creation called the camel spider.

Despite their bad reputation and threatening look, scorpion stings are usually not that bad. Most of the 1,500 known species are “mostly harmless.” Their stings are painful, but just avoid contact with the tail, and you should be fine.

This is not the case if you’re up against the Parabuthus transvaalicus, which cansquirt venom at you from their tails if they feel threatened. This behavior has been known for some time, but scientists had assumed that the reaction was involuntary.

In June 2015, however, a team of researchers discovered that the scorpions can choose when to let loose and when to hold back, depending on how threatened they feel. They accomplished this through the graceful procedure of grabbing the tails of scorpions, blowing a puff of air in their faces, and waiting to see if the scorpions squirted some death juice. Unsurprisingly, they did. If you absolutely have to pull on a scorpion’s tail, try not to breathe on it.

Although honeybees are typically harmless and non-aggressive to humans, many people are still afraid of them due to a general fear of any flying, black-and-yellow-striped insect. Japanese honeybees have their own black and yellow fear to deal with—the Asian giant hornet. “Giant” and “hornet” are two words that you never want to hear in the same sentence.

One giant hornet is about the size of a human thumb and can kill 40 honeybees in under a minute. A small group can leave an entire battleground of thousands of dead bees in their wake.

The honeybees have decided they’d had enough of being pushed around by their giant cousins and have learned to fight back. They swarm around a threatening hornet, creating a “hot defensive bee ball,” which is even worse than the phrase “giant hornet.” The interior of the ball rises to a temperature of 47 degrees Celsius (117 °F) for up to 20 minutes, literally boiling the hornet alive. Maybe you’re right to give that honeybee a wide berth.

For 10 years, researchers struggled to figure out what kind of monster had eatena 3-meter (10 ft) great white shark. While filming a documentary in 2003, researchers tagged a large female to study her movements. Before long, though, the tag showed that the shark dove 600 meters (2,000 ft) below the surface and then experienced a sudden temperature spike. Researchers had only one explanation for this odd behavior: Something had eaten the shark.

The temperature wasn’t quite right for a whale or for another shark . . . unless it was huge. That may have been exactly what happened. According to lead researcher Dave Riggs, the massive super-shark theory is probably the correct one, contrary to some of the more . . . interesting ideas proposed on the Internet. Sorry guys, it probably wasn’t an underwater Godzilla. 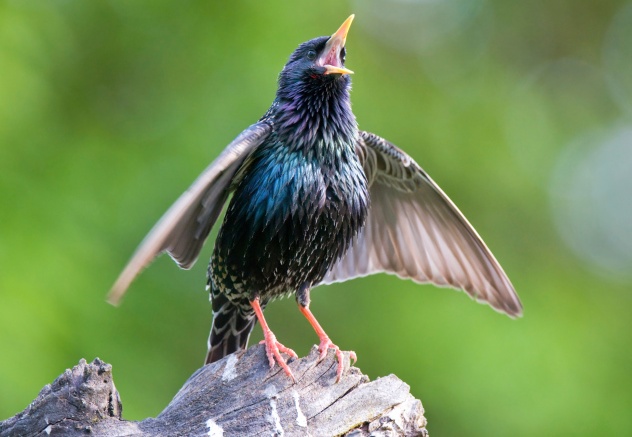 One of the things that set humans apart from what we consider to be “lesser” species is our innate ability to create and learn complex language. Although plenty of other animals have the capacity to make hundreds of different sounds and combine them in meaningful ways, scientists argue that the human language is special because it is much more complex than animal sounds.

Enter the European starling, a small, parasitic, black bird that has taken over North America after some Shakespeare fans thought it would be cool to release 100 of the birds in New York’s Central Park. Since then, over 200 million starlings have made it their life’s mission to aggressively drive other birds out of their homes and to recreate scenes from Hitchcock’s The Birds.

Starlings also happen to be excellent songbirds and mimics, which led scientists to wonder: Can starlings learn the complex grammar rules thought to be unique to the human language? The answer is yes, although very slowly.

After months and thousands of trials, a group of starlings was taught to recognize and grasp a grammatical structure that for years had been considered unique to humans—inserting information into the middle of a sentence instead of at either end. So far, the starlings don’t seem to be able to use the rules they learned to respond to things that humans are doing, but we all know it’s only a matter of time before birds rule the world.