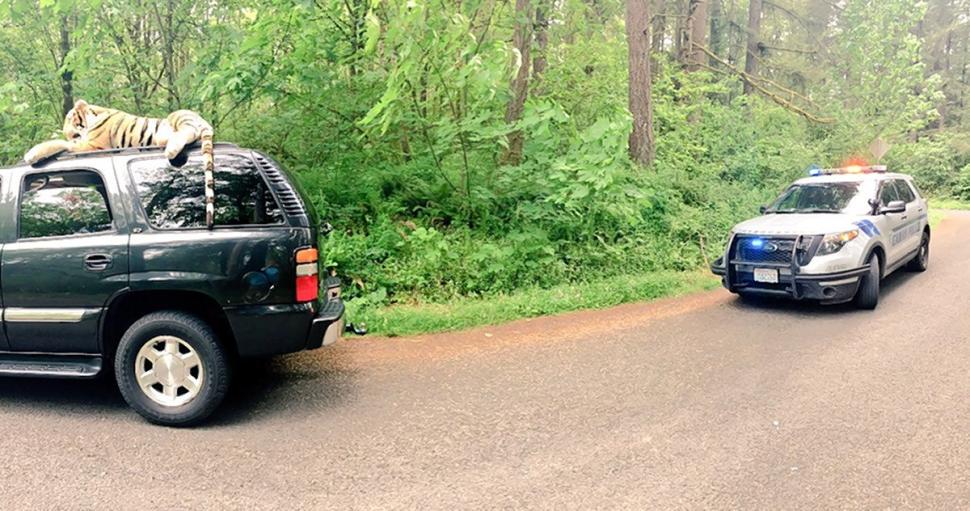 n May 2015, reports of a tiger tied to the top of a moving vehicle generated a stir and a 911 call in Camas, Washington.

Connor Zuvich was hanging out at Lacamas Lake with some friends when he spotted a giant, stuffed tiger. He picked up the tiger and tied it to the top of his SUV. Later that day, Camas police were sent to investigate an “animal problem” on Leadbetter Road, where a police officer pulled over Zuvich. At first, the 19-year-old man thought he got pulled over for having something tied to his sports utility vehicle, but it turned out someone had called 911 believing the stuffed animal was a live Bengal tiger. After cracking jokes and taking pictures, Zuvich and the officer parted ways. He didn’t blame the tiger narc and told the press, “The thing looked really realistic.”

Although it is illegal to keep large cats such as lions and tigers as pets in Washington, it’s not illegal to keep a stuffed lion tied up on the roof of your vehicle. The tiger toy remains tied to the top of Zuvich’s car. (Source | Photo)

In 2014, a user by the name of “Crux1836” posted on Reddit, an answer to the topic “911 operators, what is one call that you would never forget?” Crux1836 published the following dialog:
“911, where is your emergency?”
“123 Main St.”
“Ok, what’s going on there?”
“I’d like to order a pizza for delivery.”
“Ma’am, you’ve reached 911.”
“Yeah, I know. Can I have a large with half pepperoni, half mushroom, and peppers?”
“Umm… I’m sorry, you know you’ve called 911 right?”
“Yeah, do you know how long it will be?”
“Ok, Ma’am, is everything ok over there? Do you have an emergency?”
“Yes, I do.”
“ And you can’t talk about it because there’s someone in the room with you?” (moment of realization)
“Yes, that’s correct. Do you know how long it will be?”
“I have an officer about a mile from your location. Are there any weapons in your house?”
“Nope.”
“Can you stay on the phone with me?”
“Nope. See you soon, thanks.”
As the emergency operator dispatched the call, he checked the address and found there were multiple previous domestic violence calls. An officer arrived shortly thereafter and found a female with numerous injuries and a drunk boyfriend. The man was arrested after the woman admitted to being beaten.

In early 2015, No More, an organization that raises public awareness for domestic violence and sexual assault, used the dialog verbatim for their 30-second spot that aired during the Super Bowl. The dispatcher, Keith Weisinger, later said that he praised the caller for her ingenuity.
(Source | Photo)

3
The pop star that called 911 on himself

1980s pop star Boy George is no stranger to substance abuse. Two decades after a highly publicized battle with heroin addiction, the Culture Club singer called 911 to report a break-in at his New York apartment. According to an NYPD spokesperson, “The call was about a possible burglary. Police arrived and saw cocaine near a computer. They also recovered another larger quantity of cocaine at the same location.”

4
The marriage proposal that led to frantic 911 calls

In May 2008, residents of Plattling, Germany flooded local law enforcement with reports of a fleet of extraterrestrial visitors from the Zeta Reticuli constellation passing overhead on their way to possibly dominate the earth. Was this the real War of the Worlds, or the end of civilization as we know it? Well, not quite either.

Gort or even E.T. were not to be found. The cause for the mass hysteria was, shall we say, a unique marriage proposal set up by a 29-year-old resident. The young man had released 50 tiny hot air balloons made of paper with little candles burning under them, in an attempt to get his girlfriend to say yes. The couple was found sitting by the Isar River when the local police found them. After informing the young man of the incident that his romantic gesture had prompted, the police left the couple without any further incident. The would-be bride apparently didn’t mind that her future husband incited mass hysteria and said, “yes.”

One little bit of advice for the groom –  don’t ever take your wife to see the cult classic, I Married a Monster From Outer Space. (Source | Photo) 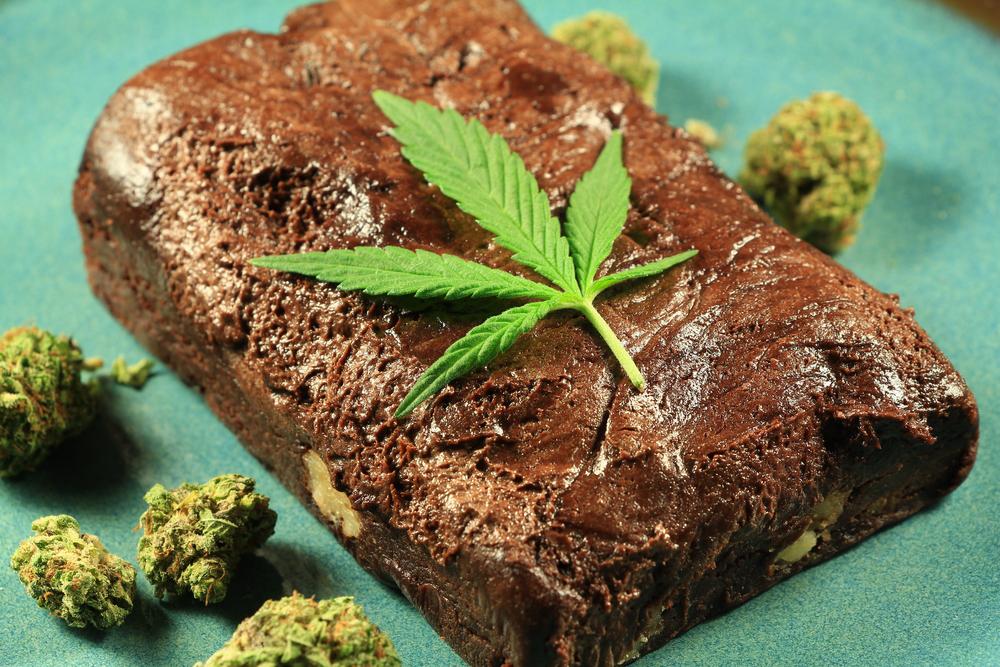 Making the rounds on YouTube is this classic –  a cop called 911 in a panic after thinking he overdosed on pot brownies. He tells the dispatcher to please send “rescue,” and thinks that he and his wife are dying or have already died. He also tells the dispatcher “time is going really slowly.”

Listening to Edward Sanchez’ pot brownie plea, you might feel a little stoned yourself!
(Photo)

Summers on North America’s east coast can get pretty hot. Add humidity to the mix and the discomfort factor goes way up. Every summer, an infant or animal is left baking in their car with the windows up, which often results in fatalities.

In July 2014, after receiving numerous reports of a baby left inside of a locked vehicle EMTs in Hoboken, NJ were called to the scene to rescue an infant. They broke the drivers side window of the car to rescue the apparently lifeless child.

The only problem? The baby was a doll.

Kitty Miseles, the car’s owner, left the doll wrapped in a blanket in the backseat. Police arrived after Miseles’ brother parked the car and a passerby called 911 about an infant in danger. Miseles described what happened next: “When he came out, there were the cops and the ambulance and they broke the window thinking that there was a baby in danger, but it wasn’t a baby, it was a doll.”

7
The neighbors who called 911 about Halloween decorations

Perhaps Johnnie Mullins of Mustang, Oklahoma was a little too good at decorating his house with his kids for Halloween.

In 2013, Mullins created a monstrous display of two dummies that looked like real bodies that met their untimely bloody end. Both were drenched in blood with one of the heads hidden under a parked car and the other head caught in the garage door.

Mullins attention to detail was quite impressive. So much so that it scared neighbor Rebecca Fuentes half to death. “My heart about came out of my chest. I thought – Oh my God! If I think it’s real, just think of what a child would think?'”

Police and firefighters who came to “the scene of the crime” told Mullins that he didn’t do anything illegal. Mullins didn’t think he was doing anything wrong either, saying that he was “just trying to scare people, that’s what I like to do.” (Source | Photo)

8
The TV show stunt that made people call 911

Stunts and special effects in films and TV look incredibly realistic these days, thanks to digital technology, but the art of doing stunts by real-life stuntmen isn’t dead. Just ask the people of Lantana, Florida.

In May 2015, Palm Beach County Fire & Rescue received several calls regarding a small plane that appeared to crash on the Intracoastal ICW just north of the Lantana Bridge. It turns out the plane that went down was actually a stunt done for the reality TV show hosted by rapper Vanilla Ice, The Vanilla Ice Project. Although it landed safely, the producers of the show found themselves in hot water.

They neglected to tell local authorities about the stunt in advance which prompted a flurry of 911 calls from locals reporting the incident. Palm Beach County Film and Television Commissioner Chuck Elderd said the crew did have a permit to film on the ground, but the seaplane took the film commission by surprise.

Vanilla Ice never expected the ruckus telling the local news, “ We figured the airplane was a good entrance for a celebration, and there’s no better way to showcase beautiful Palm Beach than to show it from the air.” Huh? Is that like your explanation to comparing “Ice, Ice Baby” to Queen & David Bowie’s “Under Pressure?” (Source | Photo)

Back in the 1930s, radio was the quickest way for the general public to get the news. However, those listening to the Mercury Theater’s broadcast on Sunday, October 30, 1938 believed the world was in the throes of a Martian invasion.

Nobody was prepared for the havoc the show would cause when a voice announced: “The Columbia Broadcasting System and its affiliated stations present Orson Welles and the Mercury Theater on the air in ‘War of the Worlds’ by H.G. Wells.”

After Welles’ introduction, an announcer was heard to be delivering the weather when an announcer broke in to report that a man named Professor Farrell of the Mount Jenning Observatory had detected explosions on Mars. From there, Martians arrived on earth and mounted war machines to decimate the earthlings.

As many as a million radio listeners believed that a real Martian invasion was underway. Panic broke out across the country. In New Jersey, terrified civilians jammed highways seeking to escape the alien marauders. People begged police for gas masks to save them from the toxic gas. One woman ran into an Indianapolis church where evening services were being held and yelled, “New York has been destroyed! It’s the end of the world! Go home and prepare to die!”

Welles reminded his listeners that the broadcast was indeed fiction and feared the controversy would ruin his career, but it actually helped him win a contract with RKO where he made the 1941 classic, Citizen Kane.

10
The homeowner and burglar who BOTH called 911

In December, 2012 in Springtown, Texas, James Gerow, his wife, and kids were asleep in their house on Lelon Lane when they realized that someone had broken into their home. Gerow grabbed his pistol and cornered the man near his truck parked in their driveway. After Gerrow asked him what his name was, the intruder, Christopher Lance Moore, dropped his keys, hopped in, locked the door and called 911 himself!

Gerow’s wife also called 911 to report the incident and told dispatchers “Yeah, hurry, up now. He says my husband’s fixing to shoot him.” Gerow blocked the intruder and asked one of his sons to point a shotgun at him.

After the police had taken Moore into custody, Gerow asked him what he was doing in the house. In front of investigators, Moore told Gerow that he “bad intentions.”

All credit to the operator on #2, that would probably have gone straight over my head.