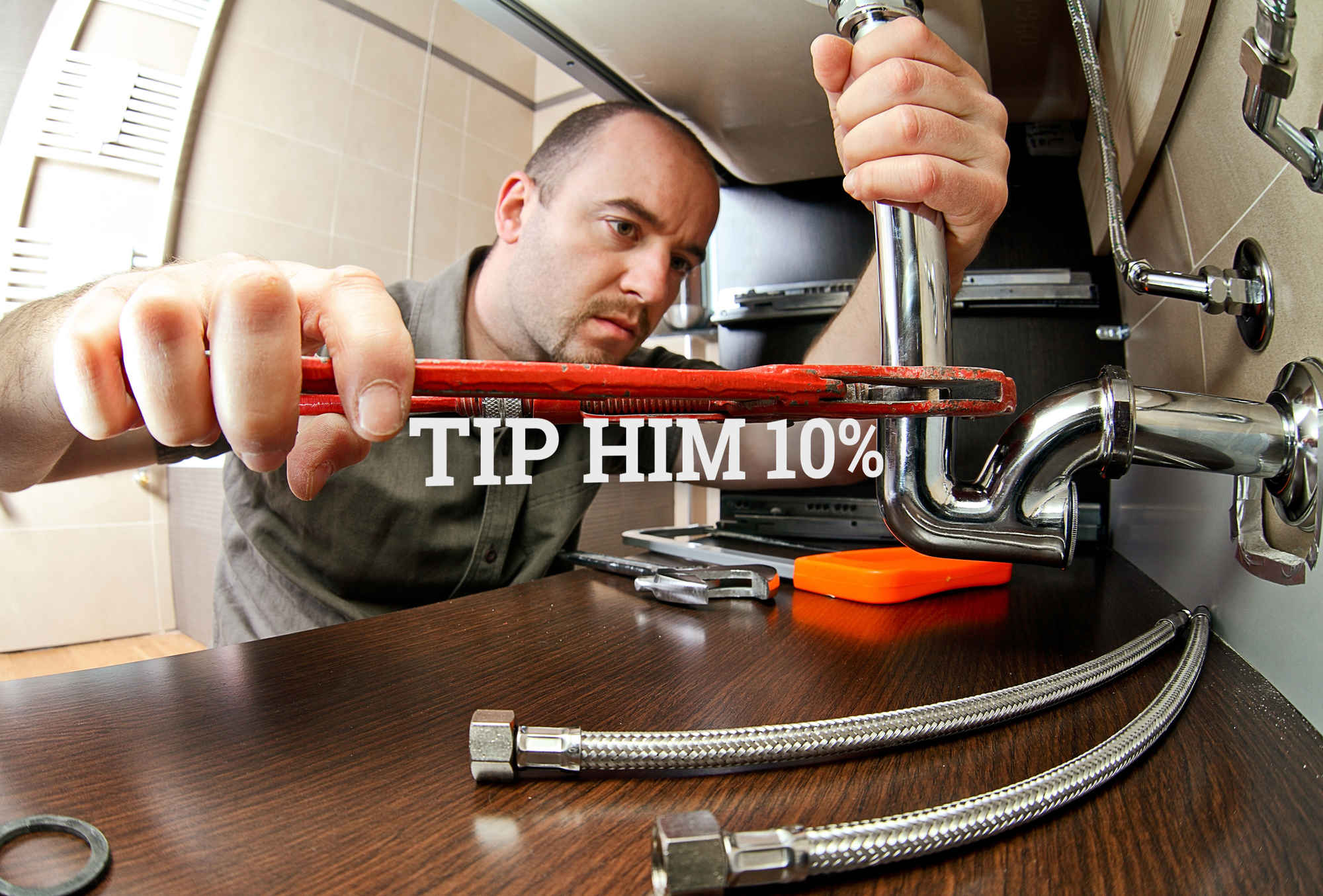 The argument against tipping is often, “Hey, you don’t need to tip. He’s just doing his job!” But since you’re reading this, you’re probably not a dick. Just because someone gets paid to do a job doesn’t mean it’s not a nice thing to give them a little extra — especially if their jobs are tough and they’ve shown they deserve it by not stealing all your electronics. Here are 11 people you don’t tip, but probably should. To save you the anxiety when it’s time to hand over the money, we even talked to people in each industry to see how much you should give ’em. 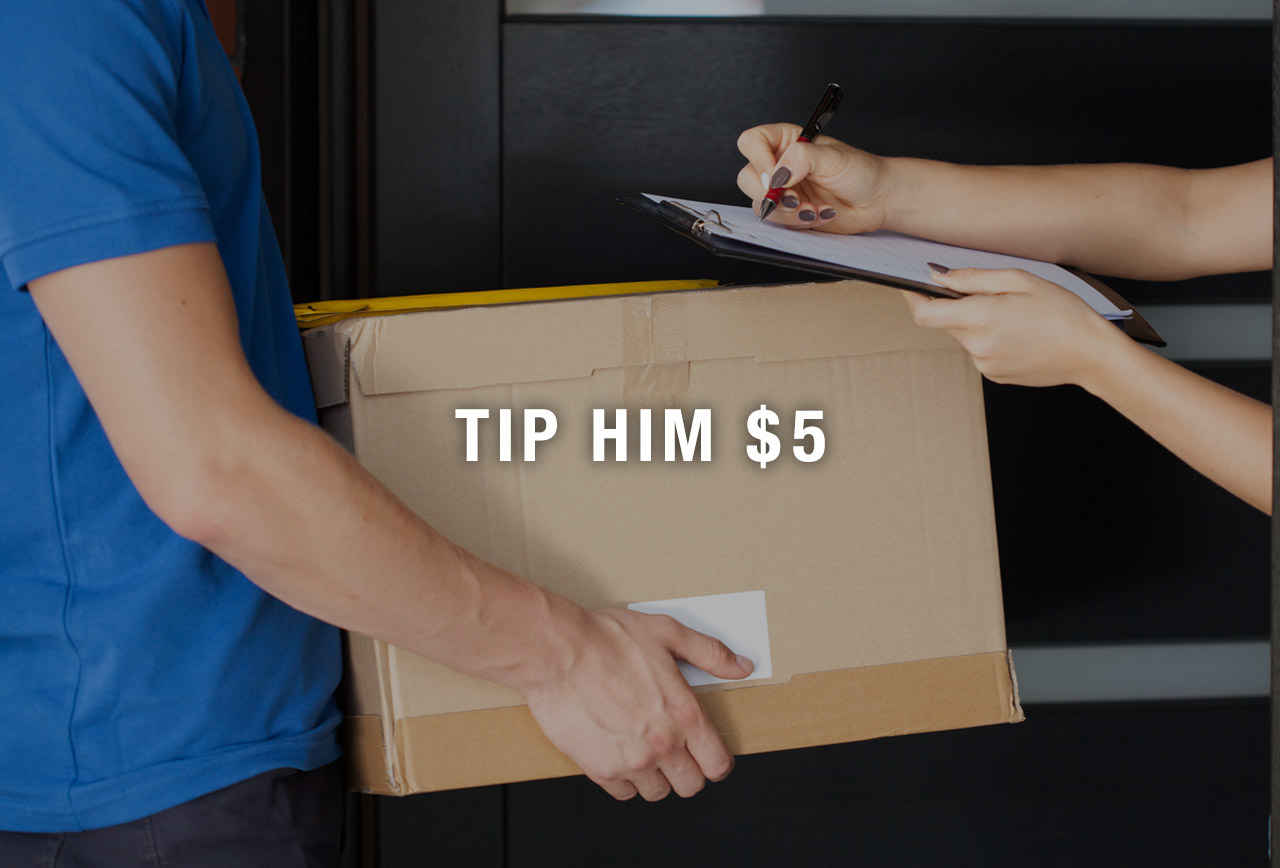 FedEx employees have great jobs! They have a salary and benefits, and everything! And salaried employees like that shouldn’t get tipped, right? Well, like the diaper brand you’re going to be buying for yourself in 40 years, it depends. For most packages, no. But I’ve definitely had huge, heavy boxes shipped to me via FedEx that were carried up four flights by a heroic delivery person. In the summer, they deserve even more.
So, how much? $5-$10. It’s enough to buy a beer and some Icy Hot at the end of the day.

People buy big boxes from big-box stores — boxes holding stuff like air conditioners, minifridges, and other modern cooling devices. So when the people working the lot at The Home Depot or Lowe’s load something like a 60lb lawnmower in your truck, they deserve a few bucks.
So, how much? They average about $10 an hour, so with a $10 tip, you might just make their day. And when’s the last time you made someone’s day? Other than your mom the one time a year you remember to call her.

The Enterprise employee who picks you up in a rental car

When a cab driver drives me 40ft, I tip them $1. When a bartender cracks open my beer, that’s at least a buck. So when an Enterprise agent/former NCAA athlete (if the commercials are to be believed) picks me up at my hotel, or friend’s house, or wherever, and drives me to Enterprise for 10-15 minutes, that person deserves some cash. There are specials at Enterprise where you can rent a car for a weekend for only $10 a day, so another few bucks isn’t going to break the bank. Based on the Enterprise employees we spoke to, they receive tips so rarely that you’ll likely get a surprised, happy driver out of the deal.
So, how much? $1-$5 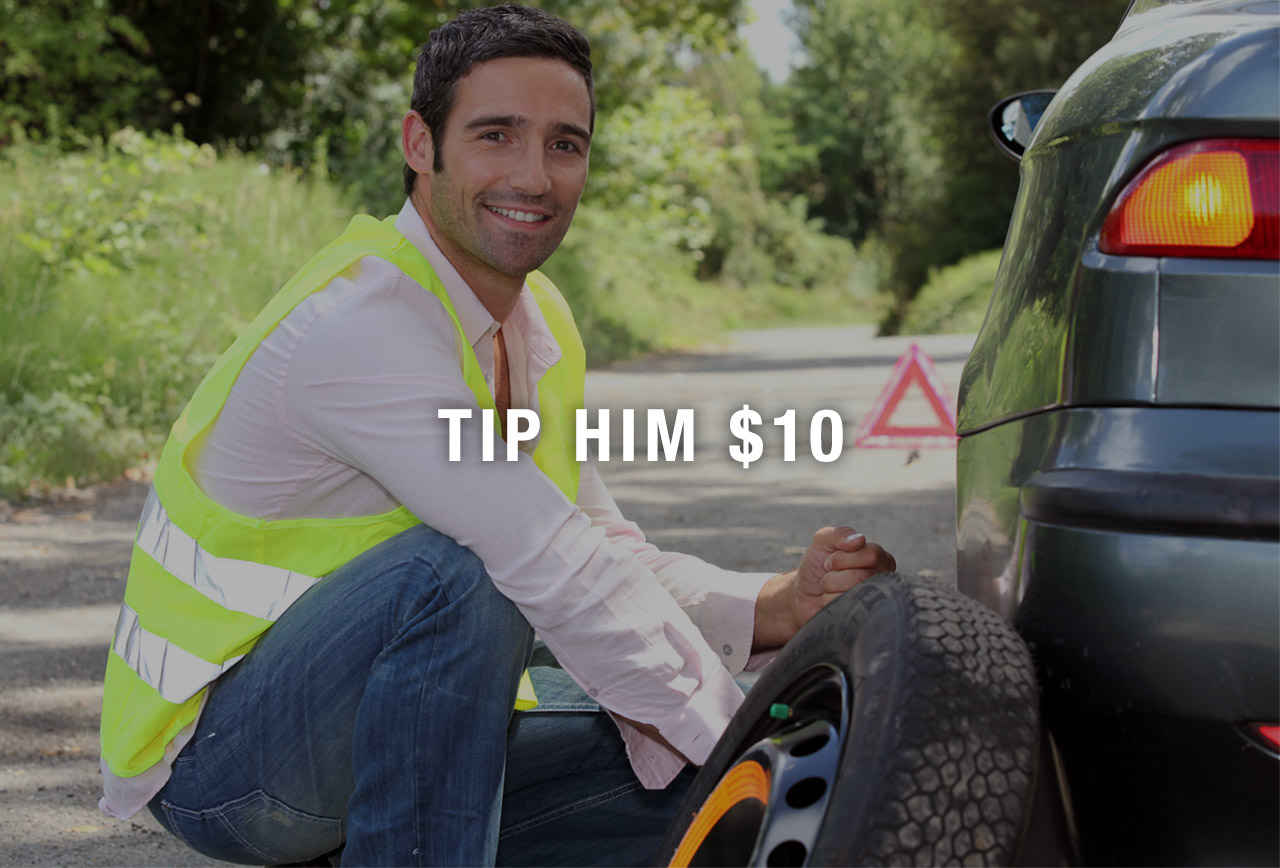 Sure, you pay a yearly membership for AAA, so you feel like you already paid the guy fixing your flat! But, based on my research, AAA pays a local tow company to come and tow your car. AAA doesn’t care if you tip, because they subcontract out the job, and they’re getting their cut either way. They’re paying the driver — but not much after taxes and fees.
So, how much? I talked to a local tow company, which said $5-$10 is much appreciated. Sounds like the least you can give to have someone bust their ass for you on the side of a highway at 2am.

What the hell does that karaoke guy do anyway? They just key in the song into the computer and kick people off when they’ve sung enough, right? Wrong. They deserve to be tipped solely on the basis that they’ve had to listen to inebriated women cry-sing Adele’s “Someone Like You” for the last few years. And that is a fate I would not wish on my worst enemy (you know what you did, Tyler).
So, how much? A karaoke bartender I spoke to said you should tip based on how much fun you had, and that $10-$20 will do the trick at the end of the night.

Your sink is clogged with hair. Again. Get a haircut, hippie. Instead of spending $10 on a bottle of Drano, you can save money by getting your super to stop by and snake the drain, and then tip them. If something goes horribly wrong around your apartment, no matter the time of day, the super will fix what needs to be fixed. They’re basically ER doctors that make house calls. And an incredible service like that deserves a tip. Especially if you drag them out of bed.
So, how much? $5-$10 per job

Whether it’s a new washer/dryer, dishwasher, air conditioning unit, or fridge — if some poor dude or dudes have to lug an enormous, heavy box up some stairs and into your place, you need to tip them. Even if you don’t have to climb steps up to your place, carrying things is difficult work. That’s Sisyphus-level drudgery. And it deserves some cash on the side because of the effort involved. Sometimes people don’t tip these types of delivery guys because they were charged a delivery fee. Getting pizza driven to your doorstep also has a delivery fee, but that doesn’t mean you don’t tip the pizza guy, right?
So, how much? A Sears appliance worker I spoke to said anywhere between $10-$20 will show your gratitude. 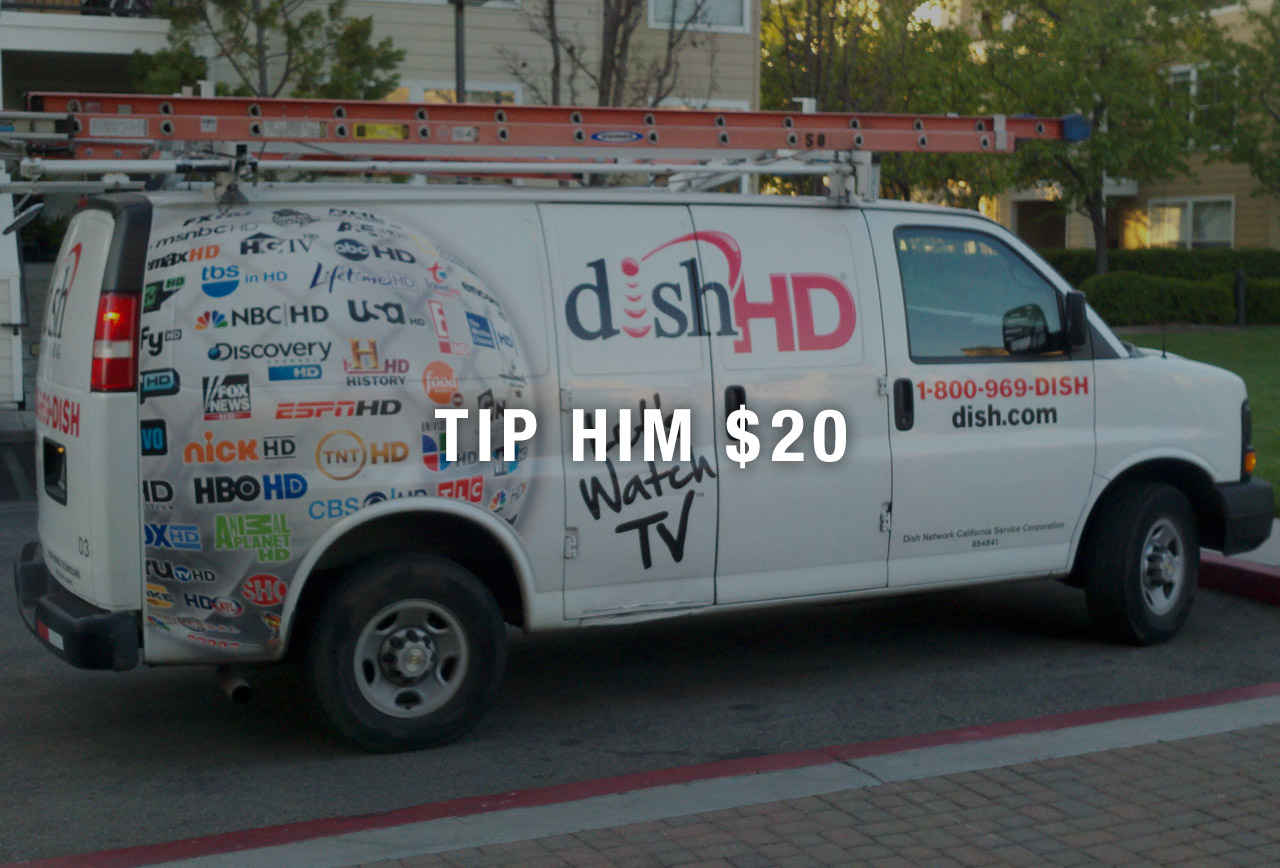 People hate the cable guy, and not just Jim Carrey’s worst movie. They don’t show up when they say they’re gonna! They don’t unscramble all the pay-per-view channels for you like they did back in 1997 at your parents house! And I agree — bad service does not deserve a tip. But sometimes cable guys go above and beyond, especially the satellite installers, who have to fasten a dish in some hard-to-reach spots, like your roof. If they take the time to install it, and then school you on some tips and tricks with your new DVR, or if they hook you up with some extra HDMI cables for no charge, then you need to break out the wallet. Rewarding thankless work that will bring you and your roommates millions of hours of entertainment in the future is the least you can do.
So, how much? $20

Airport vans are convenient ways to get to the airport in three to four hours even though you only live 40 minutes away. But they’re so cheap! And that’s why we love them. But because we’re so focused on the cheapness of it, we forget the driver has to make a living. They have to sit in traffic and listen to people’s horrific travel stories all day, and that’s something you could not pay me enough to endure.
So, how much? Treat your airport shuttle driver like a cabbie, and tip 15-20%.

This is the FedEx argument all over again: they get paid well! They get benefits! Yep, some sure do. But how much would you have to be paid to deal with the kind of shit these plumbers deal with? Literally. I bet it’s a lot. While Roto-Rooter says they force their employees not to accept tips, there are plenty of independent plumbers out there who deserve extra for putting up with your shit. Again, literally.
So, how much? 10% of total job, or $10 for a smaller job

No fewer than 47 people hand-wash the outside and vacuum the inside of my car when I take it to a car wash. It’s an amazing sight. The workers are always fast and efficient. But because there are so many of them, and people are confused about who to tip, many car owners are dissuaded from tipping at all. What if you don’t give the tip to the right guy? I’m here to help clear that up for you — give the cash to the guy handing you your keys. And they’ll make sure to divvy it up with the 340 people who helped him make your 1993 Chevy Lumina look baller as hell again.
So, how much? $2-$3 for a basic wipe-down, $5-$10 on a more expensive wash

11 PEOPLE YOU AREN’T TIPPING, BUT SHOULD BE

One reply on “11 PEOPLE YOU AREN’T TIPPING, BUT SHOULD BE”