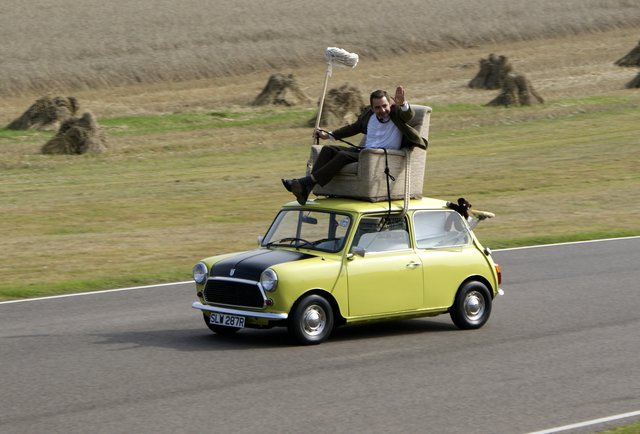 You think you’re pretty good behind the wheel, right? And you also probably think you’re surrounded by hordes of morons on the road. Sounds about right — a few years ago,Allstate commissioned a study where drivers rated themselves, and two-thirds said they considered themselves “very good” or “excellent” drivers, but were much less complimentary about 80% of everyone else. It’s a little thing called “illusory superiority,” when we lie to ourselves about how good we are at certain things even if we’re pretty honest about other people’s screw-ups.

What does this mean? It means you’re almost definitely driving like a dick, just like the rest of us. Here are just a few of the little things you’re probably guilty of doing at one point or another without even realizing it.

1. Stopping too far out in an intersection

You see that big solid white stripe? Sure you do. It’s there for a reason, which is why you should stop your car behind it. Not in front of it, not on it, not on it just a little bit.Behind it. Otherwise, you’re forcing pedestrians to walk that much closer to traffic as they go around you.

It also blocks the view of anyone in the right lane who wants to turn right on red. If they can’t see around you, there’s no way for them to know it’s safe, and they’re more likely to take a gamble. And if you’re in the left lane, you’re putting yourself too close to the oncoming cars that are turning left from the perpendicular street. And that’s no bueno.

2. Creeping forward at a red light

There are two types of red-light creepers in this world. The first is the impatient fool at the front of the line who thinks edging forward is somehow going to make the light change faster. It isn’t. The second is the guy behind you who stopped weirdly far away and is now slowly edging forward and distracting you in the rearview mirror with his intermittent scooting.

3. Driving in the left lane on the highway

Forget driving slowly in the left lane — everyone knows that’s illegal. (But seriously you know that’s illegal, right?) But continuously driving in the left lane at all, even if you’re going at or above the speed limit, is also illegal in most states. It’s for passing only, with obvious exceptions in times of heavy traffic. MIT has a great list of exactly what the law says for all 50 states. Study it. Learn it. Live it.

4. Screwing up the flow of traffic by either not using a turn signal…

So I’m sitting over here in the left lane waiting to turn, and here you come with the right of way, and you’re taking your sweet-ass time but I obviously have to wait for you to go by — but wait, are you slowing down? Oh, you’re turning. Information that would’ve been good to know 10 seconds ago.

By that same token, if I’m turning right, and you’re driving along with your blinker on, how am I supposed to know that you have no intention of turning? I see you with your turn signal, I check the other direction to make sure it’s clear, I look back at you, ready to go, and… WTF?

6. Using your signal after you start changing lanes

Look, I’m glad — really, I am — that you’re using it, but that signal doesn’t do a hell of a lot of signaling if you’re already starting to change lanes by the time you turn it on. Here’s a brilliant thought: check your blind spot, then hit your blinker, then change lanes.

7. Scaring the crap out of cyclists

One of the biggest gripes of cyclists is when vehicles cut them off when passing, or pass them too close. Cutting off anyone is rude, but it’s downright dangerous when a cyclist is involved. Cyclists are people too, guys, with the same feelings and rights to the road as everyone else. Wait until you see them fully in your rearview mirror before you get back in front of them.

8. Moving the steering wheel when you check your blind spot

It’s astonishing how many people do this. In the act of turning your head to check your blind spot, you move your shoulders. As a result, your arms move. And the steering wheel moves. And before you know it, you’re already turning. This is a problem (see #6). Basic rule of driving, people: keep your arms steady. Don’t be like this guy.

9. Crowding the car in front on an uphill stop sign/light

Your car might be an automatic, so when you’re on a hill you don’t go backwards in that moment between letting off the brake and hitting the accelerator. But for anyone in a manual, especially someone that’s not terribly experienced with a clutch, you’ve upped the stress factor by reducing the margin for error. Your Being-a-Dick rating doubles if you then honk at that driver if they roll back a little when the light changes.

As you know, the best way to brake for a turn is not to wait until the last second and slam on the brakes. Still, the vast majority of drivers — yes, this probably includes you — do this annoying thing where they lightly press the brake pedal as the turn approaches without really slowing down. Essentially, you’re still waiting until the last second before you brake for real, and because your brake lights have been on the whole time, the person behind you has no warning when you brake harder.

Instead, practice what’s called limo braking: when you start braking, press the pedal harder than you normally do, then ease up as you get closer to the turn, so you’re still slowing down enough for the turn, but not screwing with the driver behind you.

11. Using your spritzers to spray someone else’s car

When you’re driving down the highway and use your windshield washers with someone directly behind you, there’s a good chance their clean windshield is now covered in yourwasher fluid. If your windshield is dirty, it’s a safety issue, so clean it before you’re doing 70mph. Lone exception: if an enormous bug from hell or some such object splatters right in your line of sight, you gotta do what you gotta do.

If you’re in a left-most of a double left-turn lane, there’s nothing more frightening than trying to figure out if the person on your right is going to cut across the line. More often than not, they will. Because they’re a dick.

13. Doubling up in a median

When turning left without a protected light, it’s already risky enough to pull out halfway and wait in the median for a hole in traffic. But when the guy across from you also pulls into the median to do the same thing, it blocks the first car’s vision (yours) entirely, and that person graduates to the highest level of dickery.

14. Yielding the right of way when it’s really yours

I know you have only the best intentions when you let four people pull out in front of you. But letting people go out of turn creates a knock-on effect that will impact all the traffic behind you. No good deed goes unpunished, I guess.

cyclists ARE NOT people too. They are targets.

Hit the brakes then accelerate. the tailgater behind you slams on the brakes and the guy behind him hits him. You get off scott free