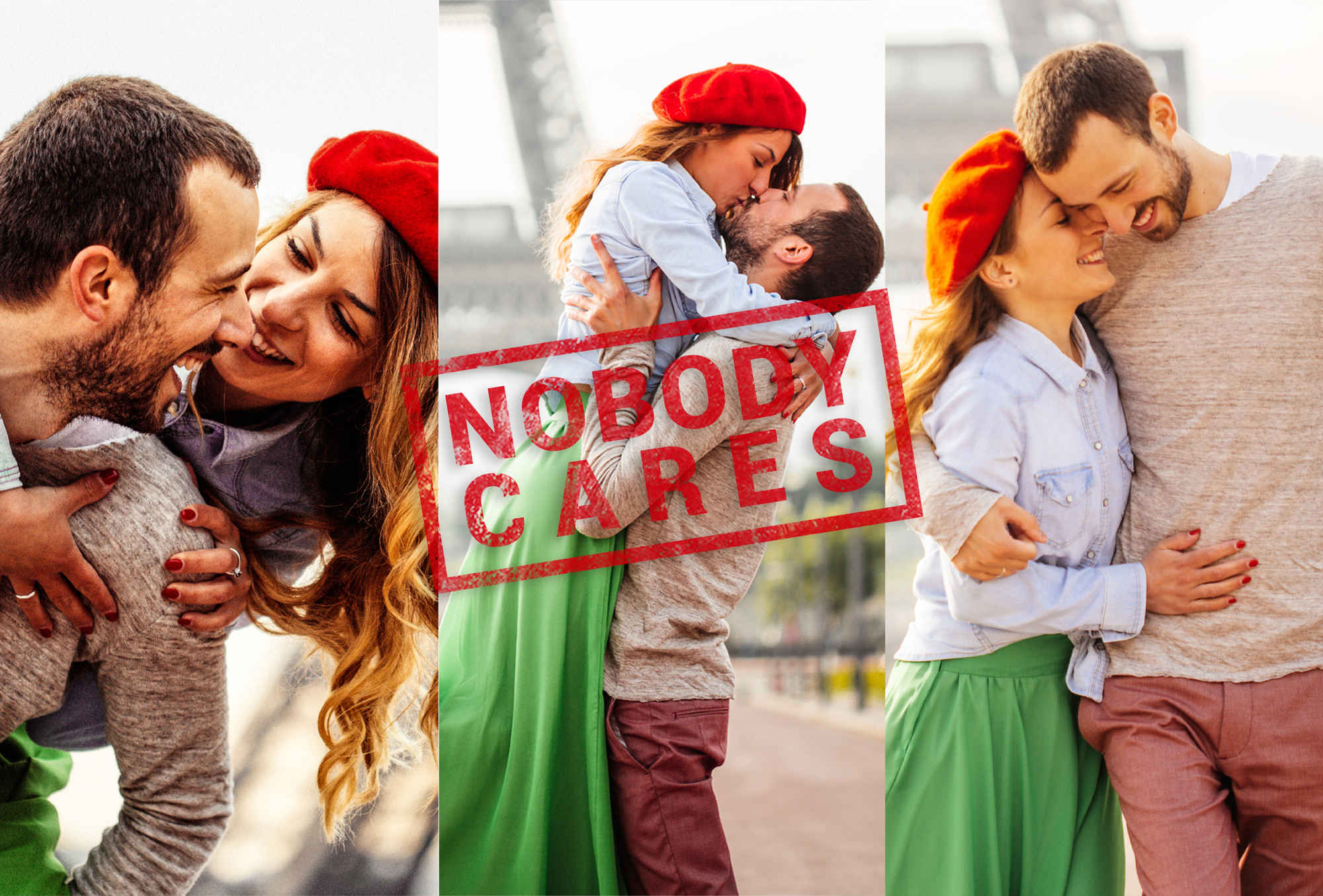 Facebook has a funny way of turning even the most tolerable humans into oversharing, overbearing agents of off-the-charts annoyance. Maybe that’s just the nature of social networking… or maybe Justin Timberlake is to blame? (I’ll re-watch The Social Network, and circle back…)

At any rate, there are some serious Internet etiquette faux pas that are unacceptable after you become a “real” fully functional adult (with rent, LinkedIn, and at least one failed career and/or long-term relationship). The first step on your path to digital enlightenment is acknowledging the problem areas, and nixing them from your newsfeed. You want to be taken seriously — it’s the only way you’ll ever get a bank loan.

Welcome to the Internet in the 21st century: where teenagers pretend to be 30-year-olds, and 30-year-olds act like teenagers. Let’s change that, OK? 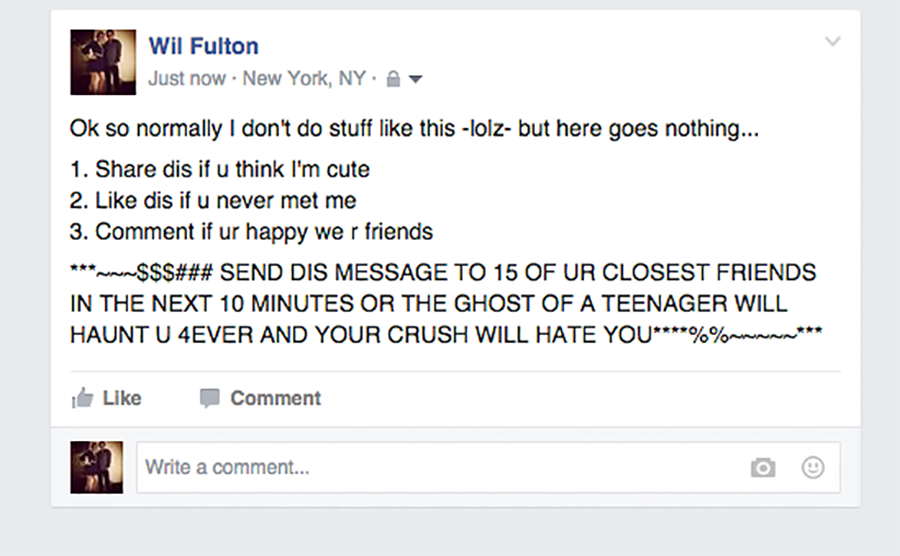 The limping ancestors of those chain-mail messages your mom used to send around on her AOL account, these are the scourge of teeny-bopping Facebookers the world over, and bringing them to an adult level makes the act even more egregious. If you think you can change fate with a Facebook status, I know a prince in Nigeria that might like to speak with you about your finances…

The whole reason televisions come with mute buttons is so we don’t have to listen to sports commentators. And those guys are professionals. Your weekly soliloquy on how and why Eli Manning is a “nancy boy” gives me some insight as to why your career as an ESPN anchor never panned out, or got started in the first place.

Facebook is designed to help us celebrate and share our lives, but not to the extent that you alienate everyone else on the planet with the uncomfortable glow of your personal success. Oh my God, I’m so happy your life is so much better than mine. Did you know more than half of weddings result in divorce, and 75% of kids turn out to be dickheads? 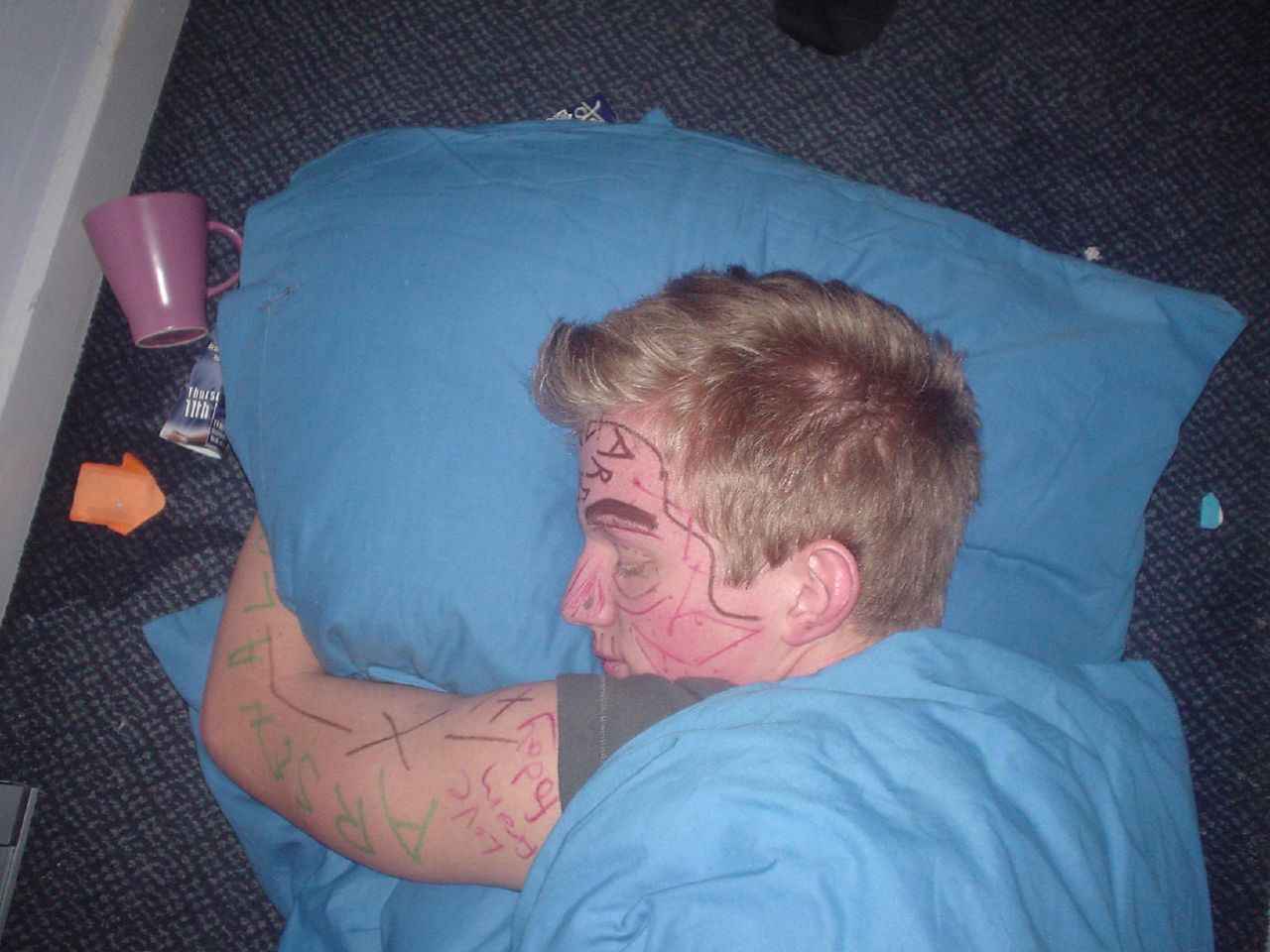 … and then apologizing for it the next day

If you do post something embarrassing after a night of tying one on, it’s even worse to try and atone for your sins publicly when the sun comes up. “Guys, I’m sorry for everyone I may have groped and/or offended last night, I hardly ever drink pinot noir. Also is anyone missing an off-white male alpaca?… Asking for a friend.” Just delete last night’s stupidity, stupid!

It’s great that you are pursuing your passions and still have some creative drive this late in life. But look, I don’t even say “hi” to you when we see each other in the elevator, I’m not going to your improv show that’s 50 miles away. Oh, wait, you sent me THREE invites? In that case… 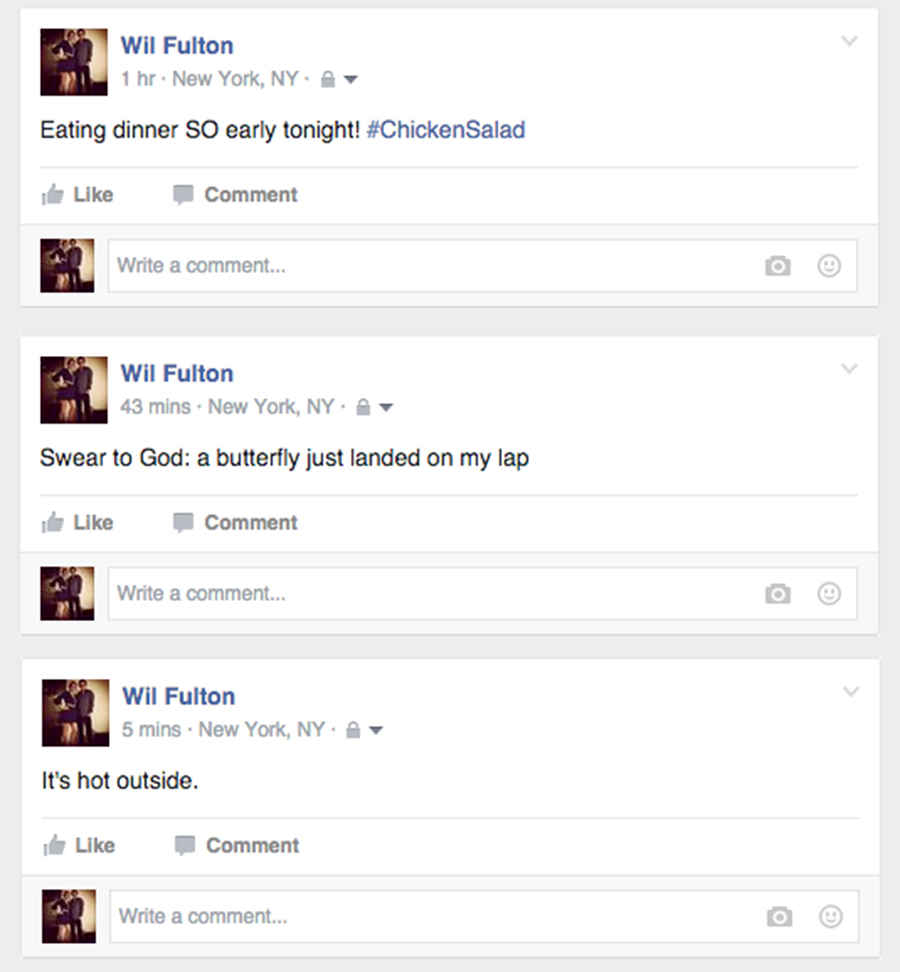 Your Facebook status is not a personal blog. It’s not a diary. No one cares about what you had for dinner, what the temperature is, or how much your nephew loved Monsters Inc. 2 (which, honestly, was vastly inferior to the original — there I said it). Just go get a WordPress. No one will read it, but at least you’ll have your dignity.

Let’s get something straight. Adult-Facebook isn’t a gateway to meet new and exciting people; it’s a means to stay in touch with people you never really cared about in the first place. Do you really need the comfort of having 2,000 friends if only 12% would actually recognize you in person? Would you walk up to a stranger in the grocery store, show them 30 pictures of yourself, tell them where you live and everything you like, and then demand they do the same? It just isn’t done.

When your high school history teacher sends you a friend request, you kind of feel obliged to accept. When she starts commenting on all of your photos and picking fights with your friends in the comments section, it’s time to reevaluate your personal friend-accepting policies. No joke: my brother’s ex-girlfriend’s brother’s friend will like and comment on my statuses all the time. We met once. It’s as weird as it sounds. 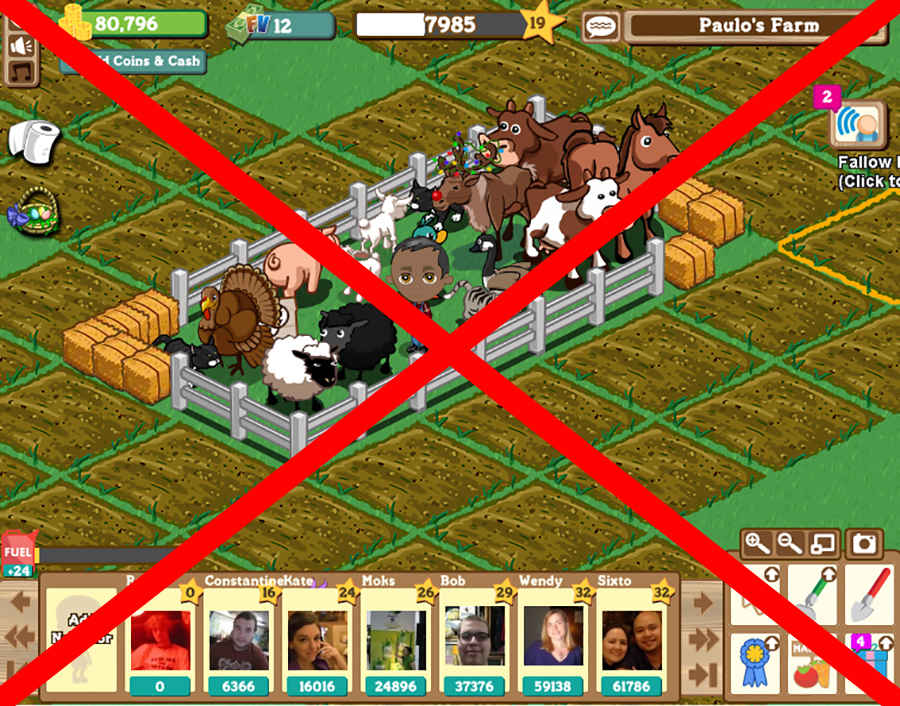 Sending out a million invites to Farmville

I DON’T WANT TO HELP YOU GET ANY RADISHES FOR YOUR FARM THAT’S NOT EVEN REAL. All you Candy Crush bastards are no better.

We all know by now that a life viewed through the Facebook lens is, on average, 5x crappier than it appears. But even still, there’s a line that shouldn’t be crossed. This includes more than one #gymselfie a week, 40+ photos of your three-day vacation, and any pictures of your (probably shitty anyway) car.

Examples: “Okay, so I don’t mean to name-drop, but Miley Cyrus is easily one of the most down-to-earth celebs I’ve ever partied with.”  “I swear owning a Porsche isn’t even worth it sometimes! Cops just keep pulling me over!” “Doctor/tailor friends, I need your help: having a penis this large is seriously messing with my life. I can’t find underwear that fits!”

Posting cryptic messages or lyrics that nobody gets

Clinical depression is nothing to joke about, if that’s what’s really going on. But overdramatic people begging for attention is. You know who you are. Fishing for compliments also applies. As does posting unprompted song lyrics with no context, including music from (but not limited to): Green Day, Oasis, Coldplay, Taking Back Sunday, Bon Iver, Drake, and Bright Eyes.

Selfies, of any variety

If a picture needs to be taken of you, but there’s no one else around to take it, does it really need to be taken after all? 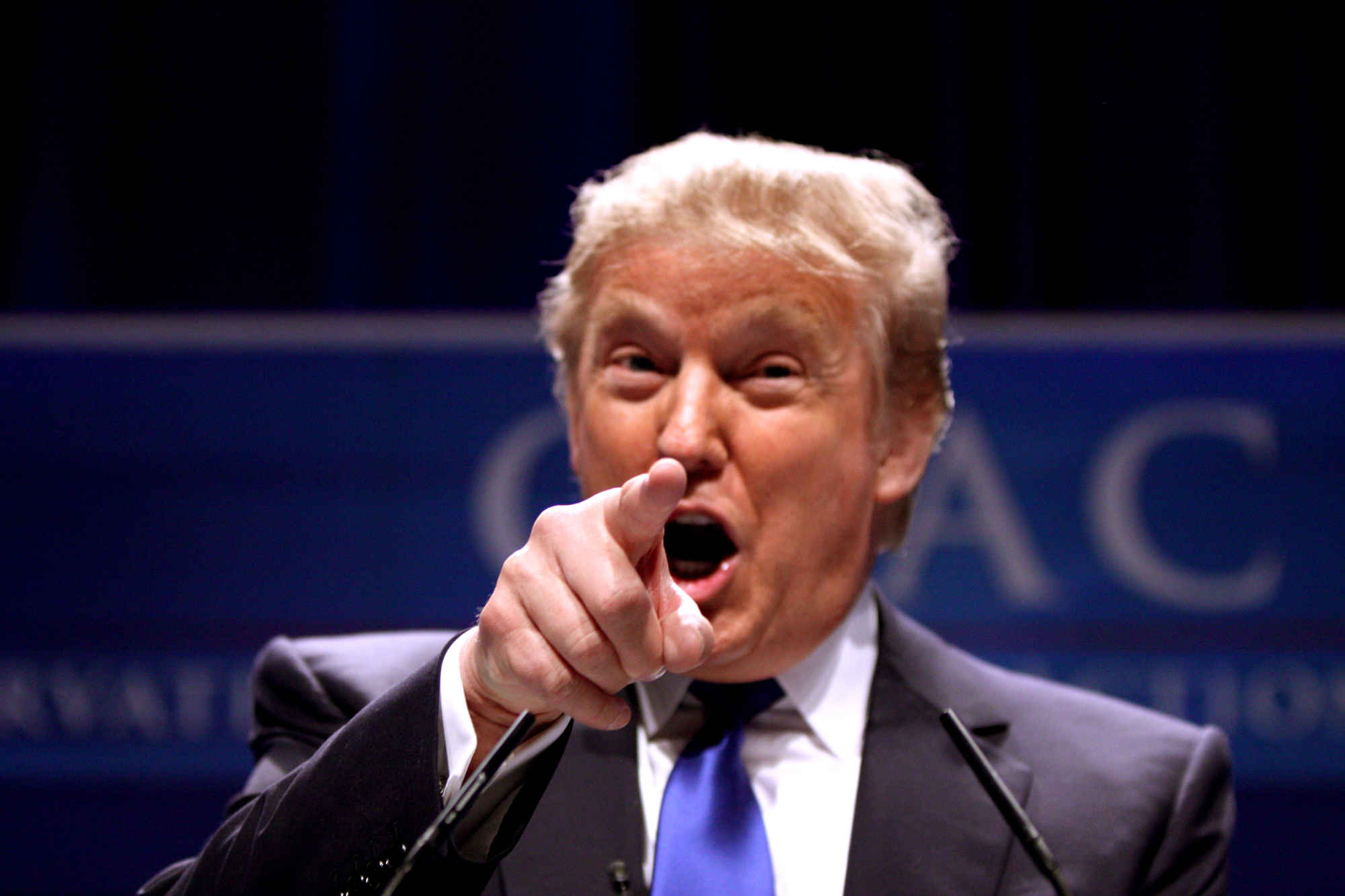 Using Facebook as a platform to spout your political views makes you look a lot like the intoxicated uncle at Thanksgiving dinner. You’re not going to change the world, or anyone’s mind, by stumping on immigration issues in between your cousin’s engagement photos and ads for Arby’s roast beef sandwiches. You have a right to believe what you want to believe, but we have the right not to care.

Talking bad about your job (past or present)

From what I’ve been told, part of being a successful adult is making and maintaining connections. Calling your old manager Beverly “a horse-faced goober who couldn’t close a sale if her life depended on it,” is a quick way to burn bridges, and sends a strong signal that you are kind of a sucky person in general.

Did you ever notice none of your truly happy, successful friends ever post these things? Hmm, coincidence? Probably not. You miss 100% of the shots you don’t take, and you hate 100% of the people that would actually ever say that.

Giving a shit about relationship statuses

Once you’re old enough to rent a car, you should probably strip phrases like “Facebook official” out of your lexicon. And, if you actually put “It’s complicated” on your profile, you probably don’t deserve the privilege of reproduction.

It should be required to pass a breathalyzer test before looking at your ex-girlfriend’s profile after 11pm.

Desperately begging for someone to hang out with you

Act like an adult and accept your harrowing loneliness for what it is: a permanent condition. Sorry for the bummer, but don’t make all your friends think about it, too.

Sorry, I was under the impression you weren’t a 13-year-old girl.

As any free marketing seminar will tell you, Facebook is an essential tool for any business — large or small. But promoting your world-changing multi-level marketing platform (*cough* pyramid scheme *cough*) five times a day is a one-way ticket to unfollow-ville. 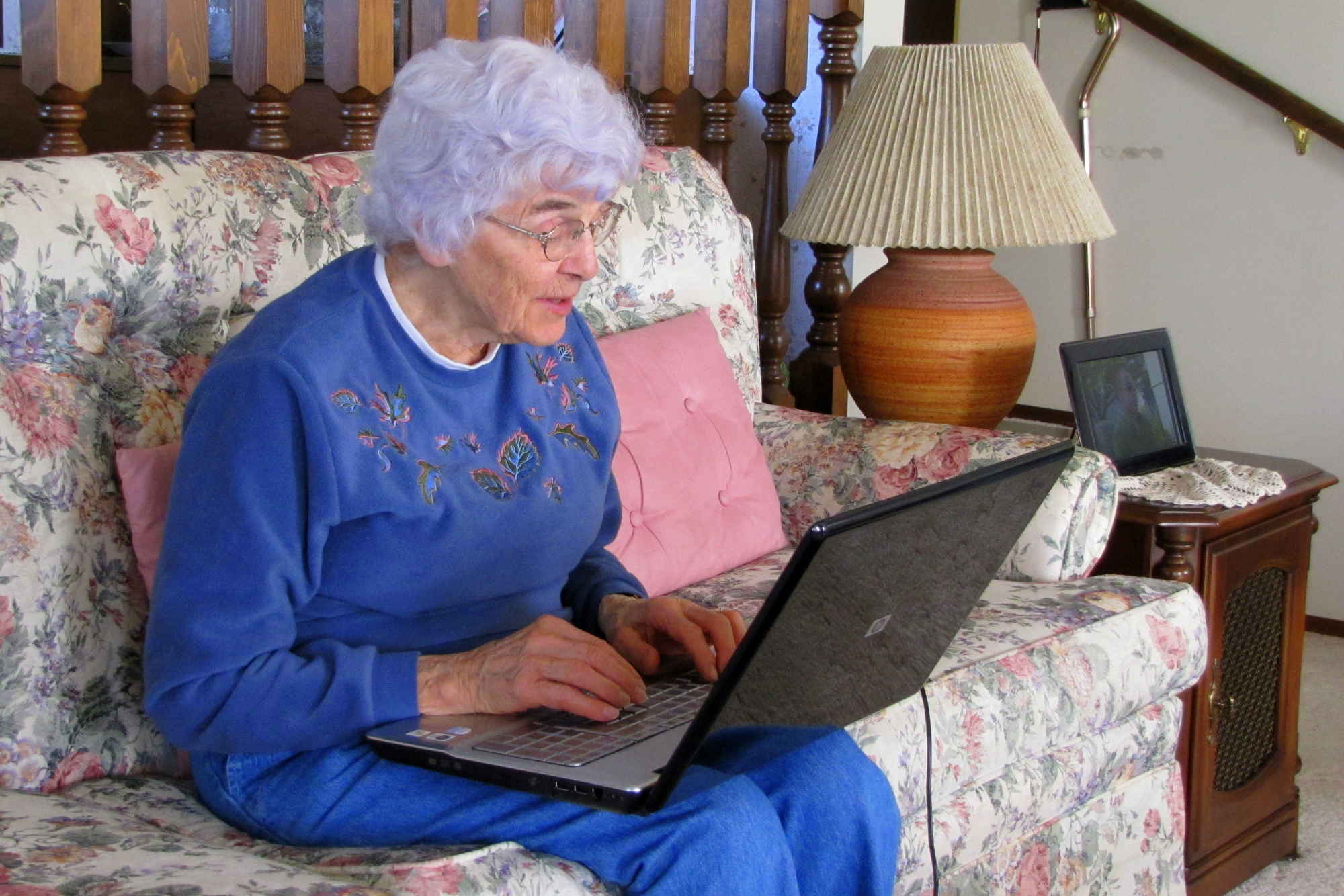 Your mom’s on Facebook, dude. Deal with it. She thinks it’s lovely and enjoys all the nice videos of baby elephants. If you’re still worried about your family seeing your posts (on an online public forum), maybe it’s time to rethink the stuff you’re into. Unless you are a furry. Then please go ahead and block your parents. They don’t want to see that. Actually, block me, too.

Father always said, “Pretend like anything you are posting on the Internet will be on the front page of tomorrow’s newspaper.” With Facebook, this is actually kind of our reality now (sorry for laughing at you, Pops). So please, keep bodily functions, diseases, sexual habits, fetishes, gruesome injuries, and dirty secrets to yourself. Or at the very least, to Instagram. #NoFilter.

25 Things No Self-Respecting Adult Should Be Doing On Facebook

I don’t even have one.