The SR-71 Blackbird is a total rockstar.

It’s served a crucial role as a spy plane in clandestine missions around the globe and has even earned the lauded title of the fastest plane on earth. Its first test flight was on December 22nd, 1964, so on its 50th anniversary, an exhaustive dive into the aircraft is in order. You probably knew the Blackbird could hit speeds in excess of Mach 3, but did you know at those speeds the plane’s skin can heat up to 1,000 degrees? Or that you could start the engines using a Buick?

Below, 27 things you (probably) didn’t know about the SR-71 Blackbird.

1. Even though it hasn’t flown in 15 years, it’s still the official record holder for fastest manned jet-powered aircraft.

Though a few pilots took it even faster over the years, 2,193.13 mph is the official record, set in July of 1976 to celebrate America’s bicentennial. This image above is that plane landing after hitting that accomplishment.

2. And it set the record with only one engine.

As with other speed records, to be official speed, the plane needs to fly in both directions. On the run, one engine shut down at the start of the second run, and the pilot tried to get it relit. The pilot, then-Capt. Al Joersz, said, “By the time we’d gone through the checklist, we’d already passed the second gate [thus officially starting the run]. Still, we exited the gate at Mach 3.2.”

3. It’s even more powerful than you think.

Each of the Blackbird’s twin Pratt & Whitney J58 jet engines are capable of 34,000 pounds of thrust. Ostensibly, the plane has about the same power as an ocean liner.

4. Those cones in front of the engines are essentially the throttle control.

They move around as part of a complex system to keep the same amount of air going into the engine at all times. They’re also one of the keys to stability when you’re going 2,000 mph. 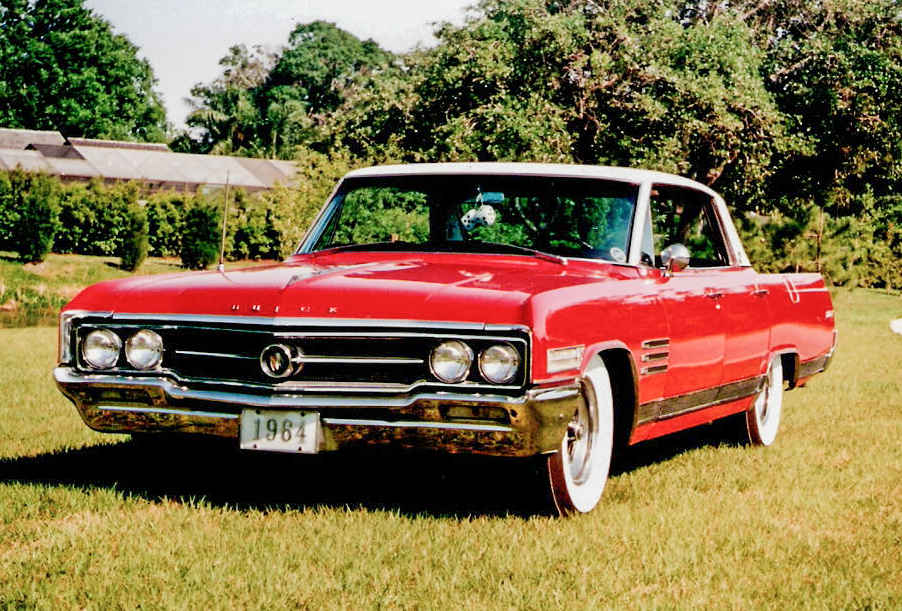 5. You could start the jets with a couple of Buicks.

There were actually a few different ways to start the J58, but one of them was hooking a couple of Buick Wildcats together and using them to spin the engine until it got going.

At over 105 feet long, it’s absolutely gigantic considering it carries almost no cargo.

7. It’s so heavy that it needs a parachute and special tires to land.

Slowing down something that weights 170,000 pounds is no joke. A parachute helps during landing, which also requires special aluminum-reinforced tires made by BF Goodrich (that need replacing after 20 landings).

The A-12 (shown) is an extremely similar predecessor that also flew above Mach 3, and was operated by the CIA.

9. There was also a variant intended as an interceptor.

Though it never made it into full-scale production, the YF-12 evolved the A-12 into a much closer shape and led to the SR-71. The prototypes set several speed records before going on to careers at NASA.

10. The A-12’s design evaluation team was headed by the founder of Polaroid.

Dr. Edwin Land knew film, and this was a spy plane, after all. He was tasked with checking out the design of the A-12 and comparing it with other potential espionage aircrafts.

They were built by Lockheed in Burbank, then trucked over to everyone’s favorite conspiracy theory HQ.

Over the course of the plane’s service, more than 1,000 missiles were fired in an attempt to take it down. The evasive maneuver was just to hit the throttle and go faster than the missile. Needless to say, the SR-71 took it’s 1.000 batting average into retirement..

13. It could photograph an entire swath of North Korea in seven minutes.

Because there was no weapon that could shoot the Blackbird down, pilots turned their cameras on and flew freely over places like China, Vietnam, and North Korea…which it could cover in just seven minutes.

14. To even be allowed to work on the plane as a crew member, you had to be married.

You also had to be between 25 and 40 years old and “emotionally stable.” This wasn’t a normal plane or a normal job, and there was a need to be extra certain about everyone involved.

15. While the plane’s details and its missions were extremely sensitive, the plane itself wasn’t really a secret.

President Johnson announced the existence of a 2,000 mph plane publicly in February 1964 in part to counter election rival Barry Goldwater’s assertion that the USSR was pulling ahead in the technology race. He then told the world about the SR-71 in July, a full five months before it’s first test flight, and four months ahead of election night.

16. It was called the RS-71 until LBJ said the plane’s name wrong in his announcement.

Lockheed designers had to change the name, by hand, on 33,000 different drawings after he said SR-71 instead of RS-71. Some contend it was deliberate and was discussed ahead of time, others say it was a slip of the tongue. Regardless, the press materials that day used the RS-71 designation. This is the prototype, mid-construction…most likely around when the name change occurred.

Here’s a picture of that legendary takeoff.

18. Over 60 pounds worth of black paint were used because black helps dissipate heat better than other colors.

When you’re cruising along at over Mach 3, the friction of the air builds up a lot of heat. Some parts of the plane would hit over 1,000 degrees at Mach 3, and the black paint helped cool things off by as much as 86 degrees.

19. The cockpit windows are covered in quartz.

The cockpit windows routinely hit temps of over 600 degrees (F), so the engineers needed something that could withstand that sort of abuse without distorting the pilot’s vision.

20. The flight suit was just as complex as the rest of the plane.

It was pressurized via its own oxygen system, because otherwise at over 80,000 feet the pilots would’ve suffocated. Ejecting at 2,000 mph would subject pilots to 450 degree temperatures, so the cabin was air conditioned to just below freezing.

21. The SR-71 leaked fuel and had to refill immediately after takeoff. Every single time.

Because the skin got so hot at high speeds, and because things tend to expand with heat, the plane’s panels were designed to have a very loose fitment when cold. While hot at cruising speed everything’s fine, but on the ground, there were so many gaps the plane couldn’t even hold fuel—crews would top it off, the SR-71 would spill it everywhere, then take off, warm up, and reload seven minutes later. 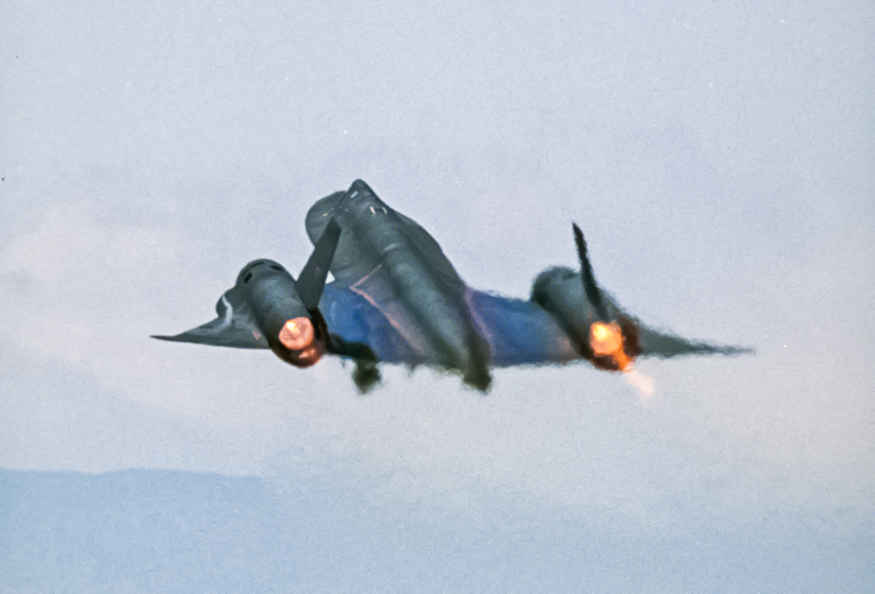 The faster the Blackbird flew, the more efficient it became due to what’s known as the ramjet effect—compression of air and fuel at supersonic speeds. That said, Blackbirds still had to refuel roughly every 90 minutes. Though in all fairness, that typically meant going 2,500 miles in that time.

23. And in order to refuel, an entire fleet of special tankers had to be built.

The KC-135Q was a highly modified version of the standard Air Force refueling rig, and it could only be used with the SR-71. Fifty-six of these were made, or three for every two of the 32 SR-71s.

24. That fuel was co-developed by the CIA, the Air Force, and Shell.

In the mid-late 1950s, JP7 was specifically designed for use at ultra high altitude and supersonic speeds, and the SR-71 also needed to use it to keep the engines cool. In other words, JP7 needed to be seriously heat-resistant lest the fuel ignite, which at 2,000 mph, is catastrophic. It’s still only used for the most advanced planes on Earth.

One of the ingredients in JP7 was also used to make Flit mosquito repellent; Shell didn’t have enough to make both. Guess who won between the government and your porch?

26. It set a new transcontinental speed record just for the hell of it.

When the SR-71 was retired in 1990, it flew coast to coast in 67m54s—roughly half the time of the previous record—pretty much just because it could. On that same flight, it managed to go from St. Louis to Cincinnati in eight minutes flat.

27. It was too valuable to stay retired.

Even though it was over 30 years old, the SR-71 was called back into service in 1995 so it could be used for research projects. By 1999, the final planes, operated by NASA, were grounded for good.