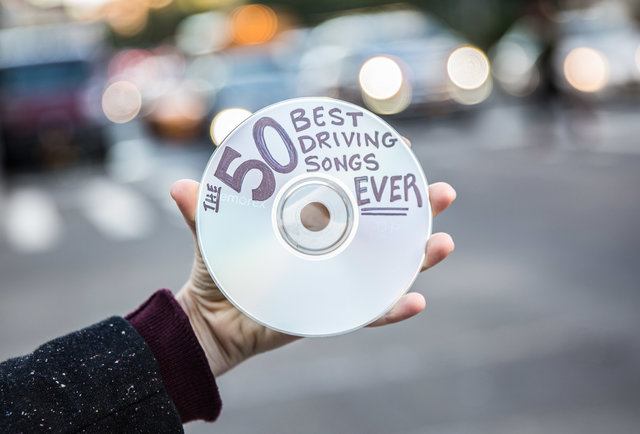 A world-beating soundtrack is as essential to a successful car journey as gas. Because we want you to be successful in all your endeavors, we rounded up 50 amazing tunes that all resonate with the road. All are either inspired by driving (sometimes loosely or partially, but trust us the connection’s there), inextricably linked to driving via pop culture, or, in a few cases, about traveling by means other than boat or airplane. Crank your engine to these, and listen to the playlist here.

50. DJ Jazzy Jeff & The Fresh Prince, “Summertime”
Put your car on cruise and lay back ‘cause this is summertime… or whenever, really, the song still works.

49. Cat Stevens, “On the Road to Find Out”
You are going to be so self-actualized by the end of this trip to Home Depot.

48. OMC, “How Bizarre”
Brother Pele’s in the back, Sweet Seena’s in the front, what could possibly go wrong?

47. Roy Orbison, “I Drove All Night”
Or Celine Dion. Or Cindi Lauper. You choose! Either way, hope that girl/boy/lobster roll is worth it.

46. Robert Earl Keen, “The Road Goes On Forever”
And the party never ends…

45. Red Hot Chili Pepper, “Under The Bridge”
If you’re not screaming the hook shirtless while someone in the back pretends to be Flea, you should pull over and evaluate your life. Hopefully not under a bridge.

44. Fastball, “The Way”
It’s frustrating because you never find out where “they” were going! But it’s still really good.

43. Generation X, “Ready Steady Go”
Billy Idol’s first band was not singing about an automobile (unless there’s a car out there called “The Cathy McGowan”), but getting ready, getting steady and going is pretty much what you want to do when you’re driving.

41. The Beatles, “Drive My Car”
“Beep beep’m beep beep yeah!” We have finally found the source of R. Kelly’s inspiration.

40. Chromatics, “Tick of the Clock”
From the Drive soundtrack. No singing. No rapping. No lyrics. Just channeling a sociopathic driving savant to a beat built for destroying city streets.

39. Big Tymers, “Get Your Roll On”
Re-imagining the wedding procession you’re currently stuck behind as a supercar club escorting you to a mansion party demands this song.

36. Iggy Pop, “The Passenger”
Pop explained in a PBS doc that this song was based on a Jim Morrison poem, making Pop the only non-NYU student in history to actually read Jim Morrison’s poetry.

35. Kanye West, “Homecoming”
Whether you’re coming back from Kroger or coming back to your estranged family after 10 years and a fight with a cyclops, you’ll pull into the parking lot like a conquering hero with this song stuck in your earholes.

34. Slim Thug, “Still Tippin’”
The only drawback of cruising to screwed music classics is the inevitable tickets for driving too slow.

33. Steve Miller Band, “Take the Money and Run”
Run straight to your car and then drive to either Mexico or Canada.

32. RIch Boy, “Throw Some D’s”
Buying a new car requires a song to announce its arrival, preferably to the rest of the neighborhood at a rim-rattling volume.

31. The Band, “The Weight”
There’s no better song to listen to when you’ve arrived at your destination after a long time on the road, even though the odds of this destination being Nazareth are slim.

29. Luna, “California (All the Way)”
Sure, this tune’s narrator sounds like Patient Zero for a plague that replaces man’s capacity for love with hazy indifference, but pay attention to the road and not the lyrics and it’s sheer asphalt bliss.

28. Smokey Robinson, “Cruisin’”
If this song does what it’s supposed to do, you won’t be driving long.

27. Tom Cochrane, “Life is A Highway”
Tom didn’t create a super deep song about a highway being a metaphor for life so you could listen to it in the tub.

26. Roxette, “Joyride”
No song more perfectly makes you feel like you’ve left self-reflection behind, pouting on the curb, as you head out to do awesome 1980s things — which makes sense because this came out in spring 1991, a few months before Nirvana killed the 1980s. Bonus points for the band actually singing “Rox-ette!”

25. R Kelly “Ignition (Remix)”
Toot toot! Beep beep! This song is even less about driving than “Baby You Can Drive My Car” is about driving.

24. Metallica, “Wherever I May Roam”
Awfully formal language there, Metallica.

23. TLC, “No Scrubs”
Just try to be more like the best friend and not the guy hanging out the passenger side. Dude is such a scrub.

22. Freddie King, “Going Down”
For years, music historians struggled over the meaning of this song, until finally some random dude on a random lyrics site cleared everything up. Thanks guy!

21. The Eagles, “Take It Easy”
The one song that people who love The Eagles and people who hate The Eagles can get behind.
20. The Talking Heads, “Road To Nowhere”
With this on you can drive all night and then some.

19. Nat King Cole, “Get Your Kicks (On Route 66)”
Even better if you’re actually on Route 66, but really any route will feel iconic if this is playing.

18. Whitesnake, “Here I Go Again”
For safety reasons, remove hot 1980s starlet from atop your hood before taking car out of park.

17. Jay Z, “99 Problems”
If you really read the lyrics, it’s an unexpected ode to responsible driving.

16. Gary Numan, “Cars”
It’s entirely possible that this song is about a terrifying futureworld where the only sane place for a paranoid man to hide is his car. Or maybe it’s just a great MTV video?

15. Nelly, “Ride Wit Me”
Come on boo, you know this song belongs on this list.

14. Deep Purple, “Highway Star”
If you can match this falsetto, you get an extra highway star. You are a very special little boy.

13. Cake, “The Distance”
You are a total weirdo for listening to this amazing song by yourself in your car.

12. Grateful Dead, “Truckin’”
Especially fun to play when driving side by side with actual truckers.

11. Rolling Stones, “Before They Make Me Run”
Trying to nail down the best date for that road trip vacation? Let Keith Richards offer some advice.

10. Jackson Browne, “Running On Empty”
Such a good driving song that listening to it when you’re not driving is borderline uncomfortable.

9. AC/DC, “Ride On”
AC/DC’s best slow-blues song is also the best song on the soundtrack to that movie where Emilio Estevez has to fight a convoy of sentient trucks!

8. Billy Ocean, “Get Out Of My Dreams, Get Into My Car”
This is not a request.

7. Tom Petty, “Freefallin’”
Even better when you pretend a moment of moral clarity just cost you your job as a big-time sports agent as you scream the lyrics while laughing hysterically and playing terribly syncopated hand-drums on your steering wheel!

6. Guided By Voices, “Motor Away”
A relentlessly inspiring “Forget you guys, I’m running away from home!” theme for people old enough to drive away instead.

3. Eazy E, “Boyz-N-The-Hood”
There aren’t many other songs that will make you think, “Huh, maybe I really should install hydraulics in my car?” And yes, you should.

2. Bruce Springsteen, “Born To Run”
C’mon Wendy, get in the car already.

1. War, “Low Rider”
It doesn’t matter how tall your car is, this song will make you feel like you couldn’t run over a book of matches.

THE 50 BEST DRIVING SONGS OF ALL TIME

4 replies on “THE 50 BEST DRIVING SONGS OF ALL TIME”

List invalid. This should be #1 and is not present:

While I agree with both of you, Robert Plant – Big Log. #1