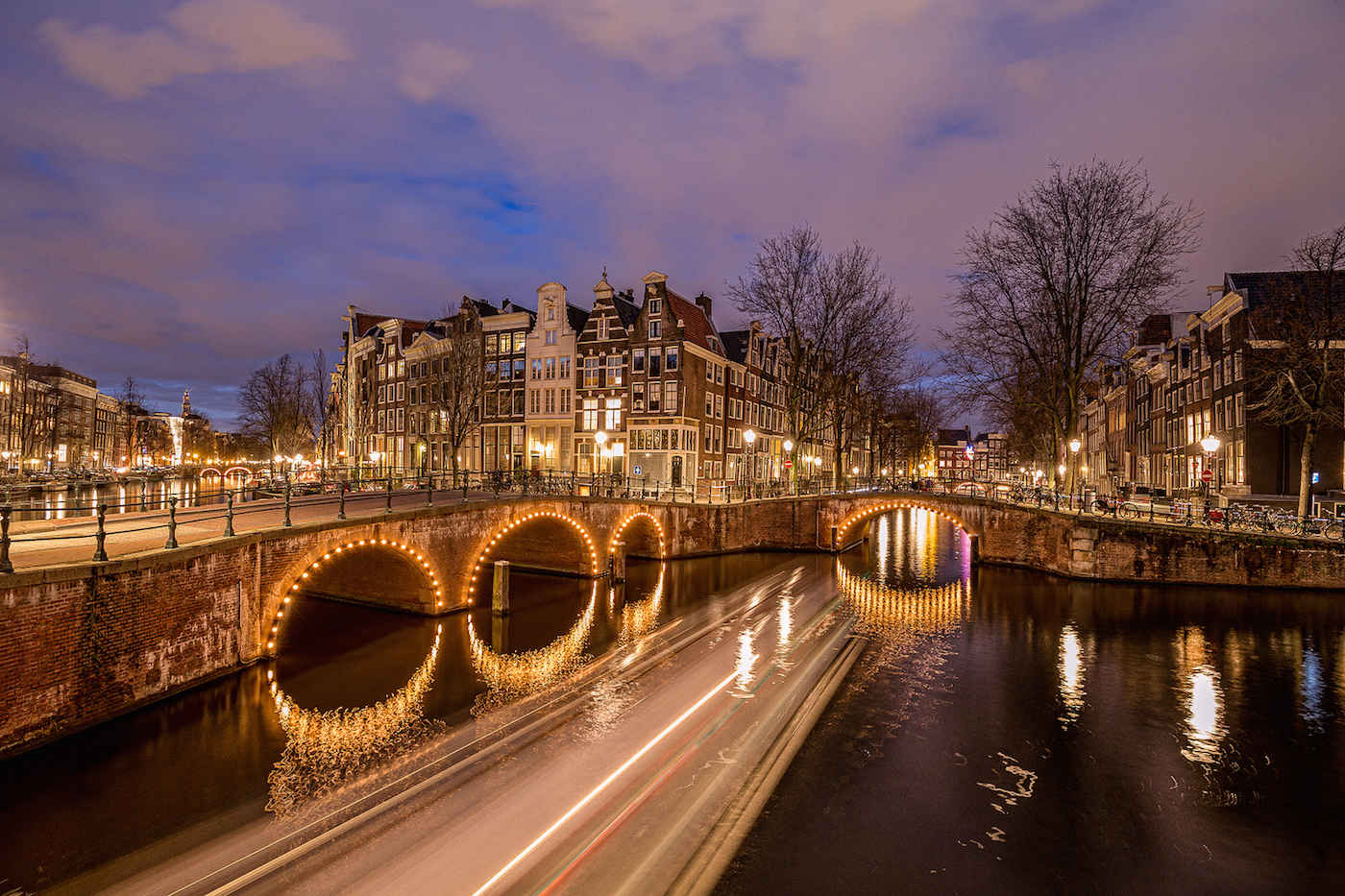 While Amsterdam may be one of the most permissive places on Earth, some things here aren’t merely within your right to do, but rather are your responsibility to experience. This list includes EVERYTHING you should be ashamed you’ve never done in Amsterdam… 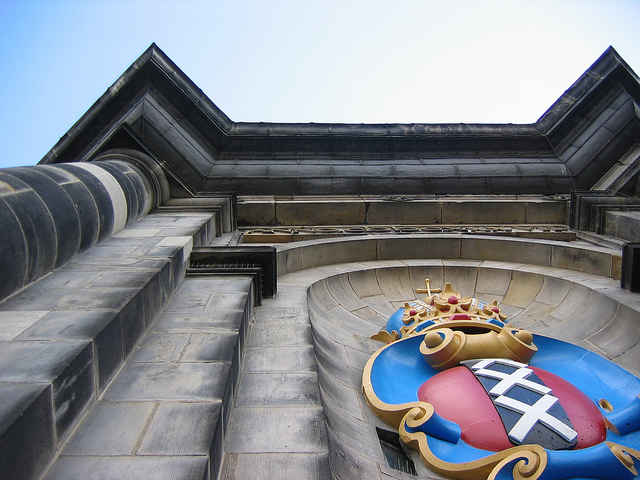 You know you need the exercise. And at 40m, this is the tallest (and prettiest) tower in central Amsterdam, so the views are unparalleled. It’s also super-historic (dating back to 1638), what with the crown of the Hapsburg emperor on top and Rembrandt and others buried in the church below. Entrance is by guided tour only (€7.50), and they only let six people go up every half hour, so show up at the beginning of the day to reserve the time slot of your choice. Summer only. 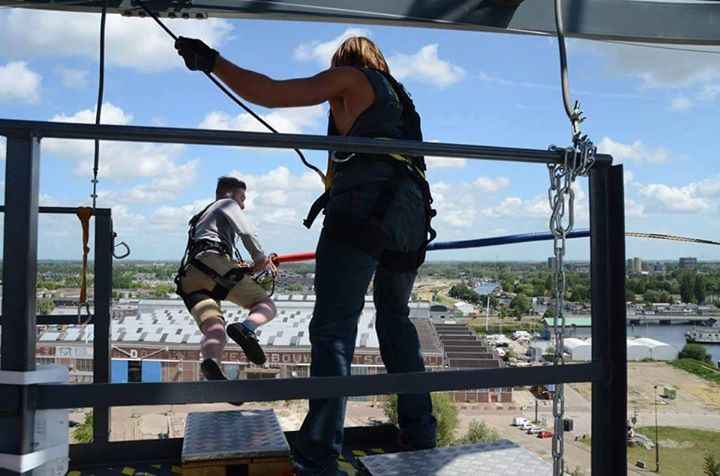 2. Go bungee jumping over the IJ at the new Crane Hotel

Filling the gap sadly left by the old set-up at the pier in Scheveningen, The Hague, this clever and high-profile new NDSM hotel has moved the country’s only bungee action closer to home. You get 30 minutes to admire the view over the IJ, then it’s down you go.

3. Attend a concert at the Concertgebouw

Even if it’s just one of the free lunchtime concerts, go to experience what’s been unanimously decreed as some of the best acoustics in the world. Robeco SummerNights Festival, going on through August, is an excellent excuse to go. 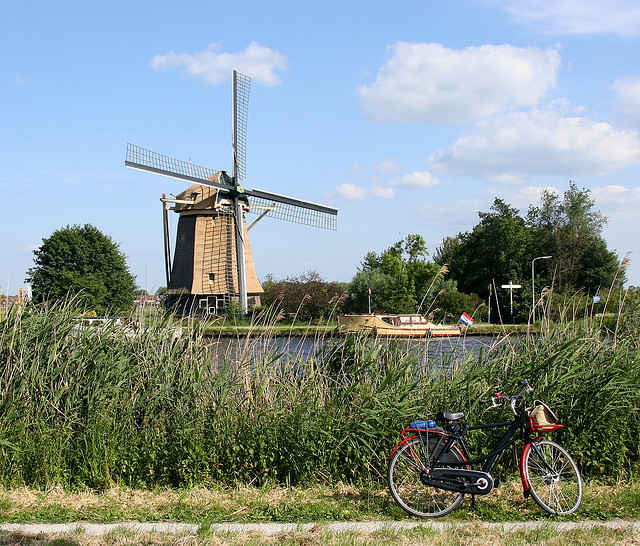 This picturesque village, a mere 30-minute bike ride from the city center, has somehow managed to hold on to its identity and a surrounding swatch of open green space between two of the city’s hungry, southern-reaching arms. Several classy restaurants make use of the charming setting — including one of our favorites, Jaimie van Heije.

5. Bike through the tulip fields around Haarlem in April

This doesn’t really need an explanation. Take your bike on the train to Haarlem and start there.

Even if you’re not a soccer fan, do it once. The enthusiasm is contagious, we swear. And, if you speak any Dutch, the taunts the fans throw at each other are… noteworthy (if not always in a good way). 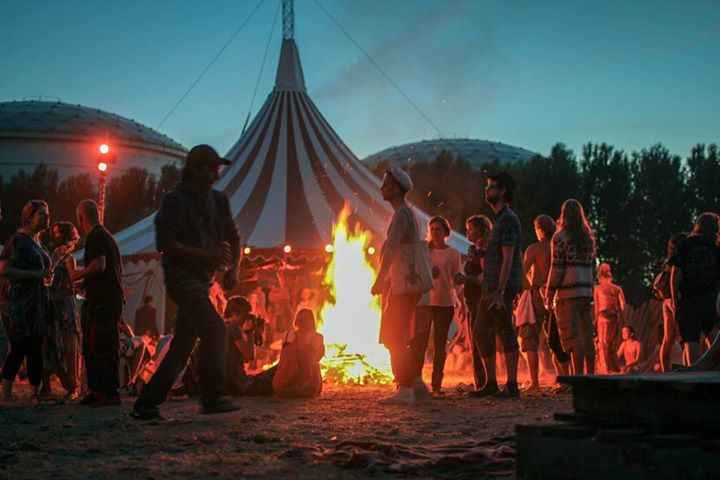 This old village perched at the western reaches of Amsterdam’s harbor zone is a squatters-community-turned-artist-retreat. Basically, its Amsterdam’s answer to Christiania. And you bet the love and creative juices are flowing whenever they put on an event. The best party of the year is the 5-day Landjuweel Festival, in 2015 taking place Jul 29th-Aug 2nd.

8. Experience a bubble fountain on Frederiksplein

Walk by this isolated fountain late at night around student-group hazing time and you might stumble upon a square overflowing with magical bubble foam. It’s pretty, well, fracking magical. Just don’t be the one to get caught trying to make it happen.

9. For the more smartshop-inclined, take your truffles to the Amsterdam Forest

There’s more space and more privacy for you to do your thing, as well as a varying landscape of natural scenery. Spring, when the most flowers are in bloom, is the best time. Bring friends. 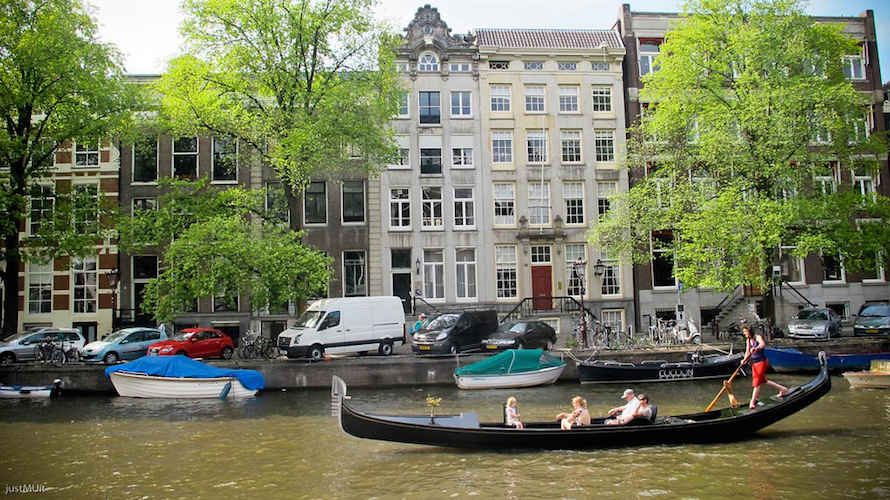 Let’s take the “Venice of the North” nickname very seriously for a moment here (though Amsterdam actually has more canals, hmph). For €140-250, you can rent out the services of your own gondolier for one or two hours in the boat she made with her own hands. She’ll throw in a bottle of Prosecco and/or Champagne too, for a little bit extra.

Sure, Trouw and De Toren may be gone (for now), but the city has now handed out 24-hour licenses to three new clubs: Radion, Cruquiusgilde, and a new incarnation of Trouw to be born in a former school out by the Western ring road. But you’ll have to wait until the end of summer 2015 for the first of these new licenses to take effect.

12. Have a karaoke night at The End

The interior is grimy, the bar staff is frequently rude, they don’t hand out shots to the singers like at other karaoke nights, and we’ve had wallets stolen there more than once — but let’s face it, this loud and cramped drinkers’ black hole is the best karaoke game in town. You’ll leave closer to your friends and to the strangers nearby, all of whom have been up on stage with you at some point in the evening. Usually at the same time. 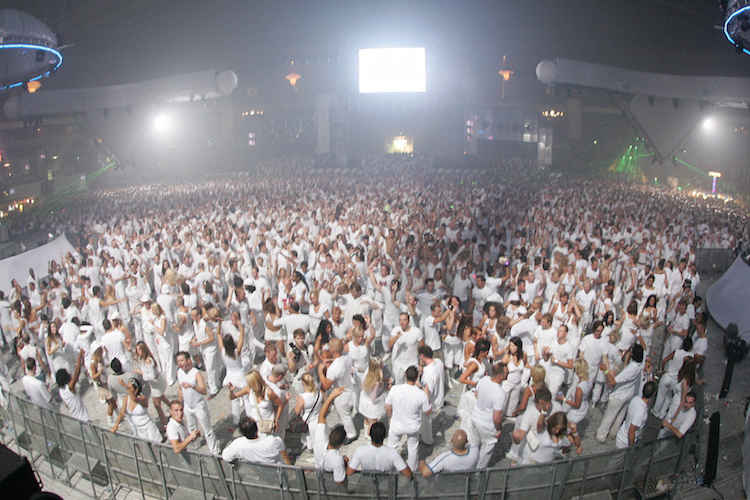 Amsterdam’s got a lot of dance parties going on in the summer, but this early July party is arguably the most epic — epic enough to take over the city’s largest stadium. In its favor: party-goers are instructed to dress all in white, making for a surreal experience for even non-party-goers walking around town the day of the festival.

It’s an expat rite of passage to check out this nightly show: a mix of American- and Dutch-baiting staged and improv comedy from the troupe that used to count Seth Meyers and Jason Sudeikis among its members. Did that whet your comedy appetite? Then check out Easy Laughs, Mezrab, and the growing number of other English-language comedy and storytelling nights popping up around town. Or take one of Easy Laugh’s weekly workshops.

Free yourself from the shackles of professional or even private tours. Gather up 5-7 friends and hit up one of the many rental spots around town — just remember you’ll need a sober driver. 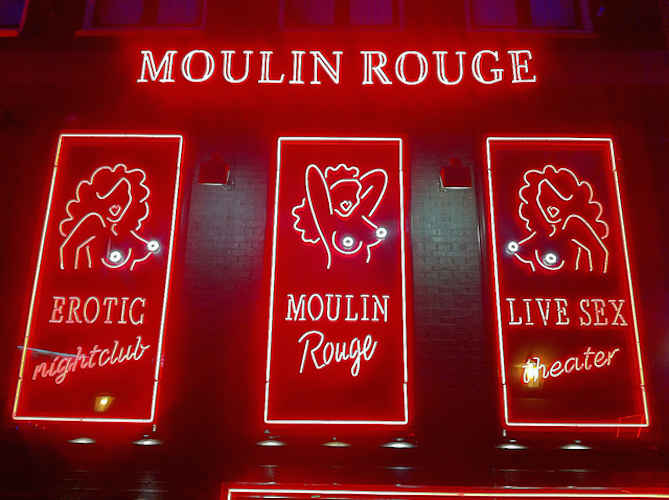 You’ll be shocked how relatively unscary the whole experience is. And then you have conversation fodder for any tourist you ever meet.

17. Participate in the Vrijmarkt on King’s Day

Yeah, it means blocking out a spot days in advance and getting up early and staying with your stuff… OK, maybe warm up by selling your stuff at the IJ-Hallen first. But some year you’re going to need a King’s Day break. Or some money.

Sinterklaas is like the love-child between Santa and the pope, and he arrives riding a white horse on a steamboat, surrounded by, according to David Sedaris, “six to eight black men.” Actually, these are the guys (or gals dressed as guys) you’re really going for — they’re the ones who hand out the free candy loot. 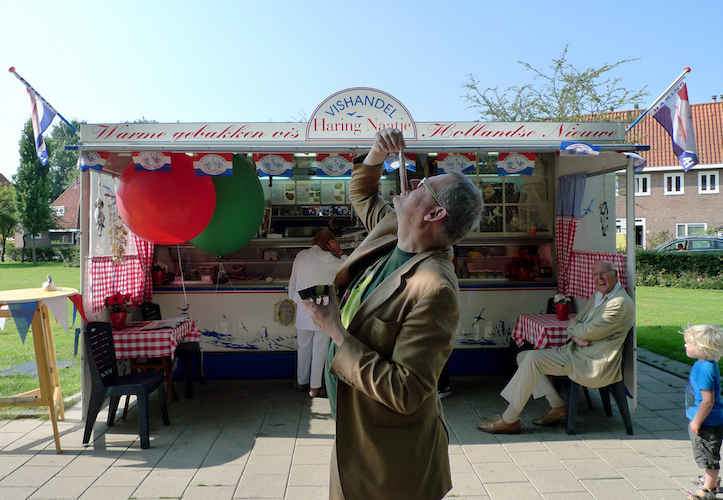 You have to, right? I mean we don’t have to. But you definitely should. Aim for June or July for the best stuff.

20. Participate in a Friday Night Skate

A mass of wheeled Amsterdammers move through the city as a pack once a week, leaving Vondelpark at 8:30pm. Around since 1997, the Friday Night Skate is a social-exercise institution.

If you haven’t been to these late-night museum parties each November you’re only punishing yourself. The night zoo tour is especially memorable — go later in the day, after the early tours have gotten the animals more active. Find the activities not quirky enough, and the 2am closing time downright draconian? Just wait until Nuit Blanche rolls around again… 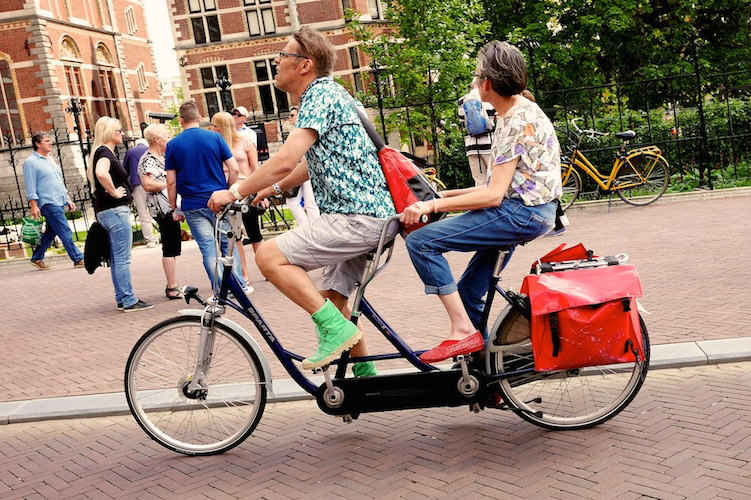 Because it’s Amsterdam and you can. And because there’s no better way to test a relationship.

You have to be really liquored up to go in voluntarily. But, in made-up statistics, about one out of every five Amsterdammers will take an accidental tipsy spill at some point. Consider it your city christening — just don’t be one of the five people per year who drown.

24. Harvest fruit, nuts, and other plants from around the city to eat at home

Picking edible plants already growing around the city is becoming all the rage in Amsterdam, with everyone from hippies to high-end restaurants offering guided tours and workshops. Zoom in on your area of the wildplukwijzer (“wild plucking pointer”) map to find out what’s edible and just laying around on the ground near you. 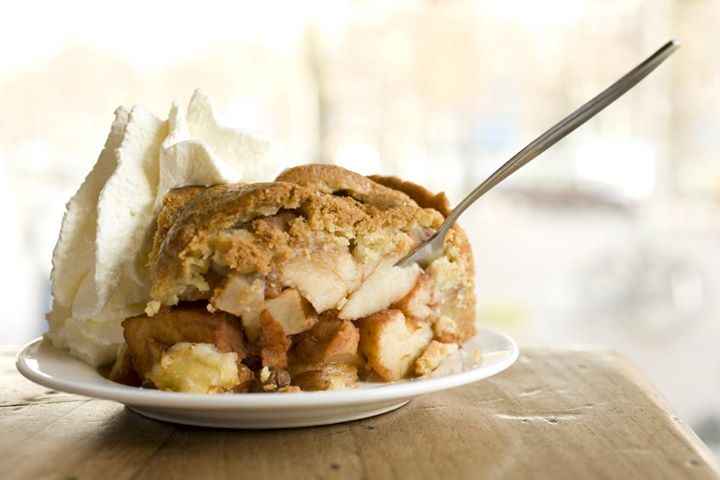 Do you like your apple pie saucy, or do you prefer it chunky? This is something you need to know about yourself, and the two best slices in the city will help you on your journey of self-discovery.

26. Yell at a tourist walking in the bike path

It feels good, doesn’t it? Deep down we all know what that clueless sap feels like. But that’s deep down. Up top, we know that the pavement there is effing pink with a bike painted on it, and they are IN. THE. WAY.

Inevitably it will happen: you’ll be caught without your lights at night or running a red. You’ll be ticketed. You’ll be a contributing member of society. 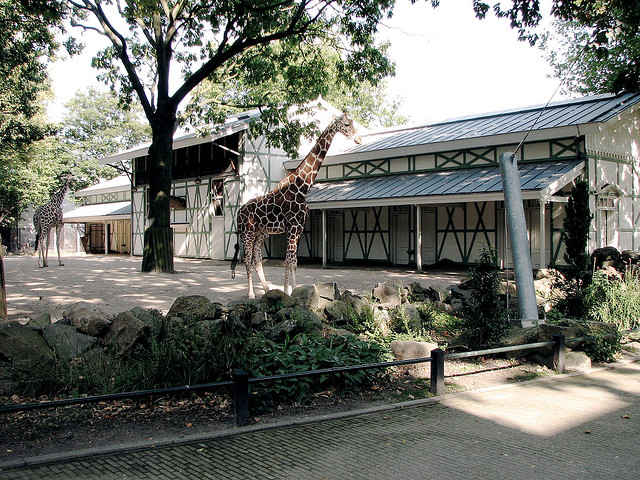 28. “Steal” a peek at the Artis giraffes without paying

From the Entrepotdok (or the water next to it, if you come by boat) you can see right into the giraffe enclosure without entering the zoo. The long-necks are just out there walking around on the other side of the fence. From here you can also see zebra, antelope, and a few other animals from the “Savannah” enclosures. From the little Artisplein square around the corner behind the Plantage restaurant, you can also see the flamingos, camels, and actually reach into the petting zoo and steal some free goat cuddles.

29. Get into a bike accident

Hopefully don’t break your leg, then get back up and brush yourself off and get on with life. Maybe a little more carefully for a while.

It’s a tulip glass of traditional jenever followed by a full beer chug. The older the bar you do it in the better., 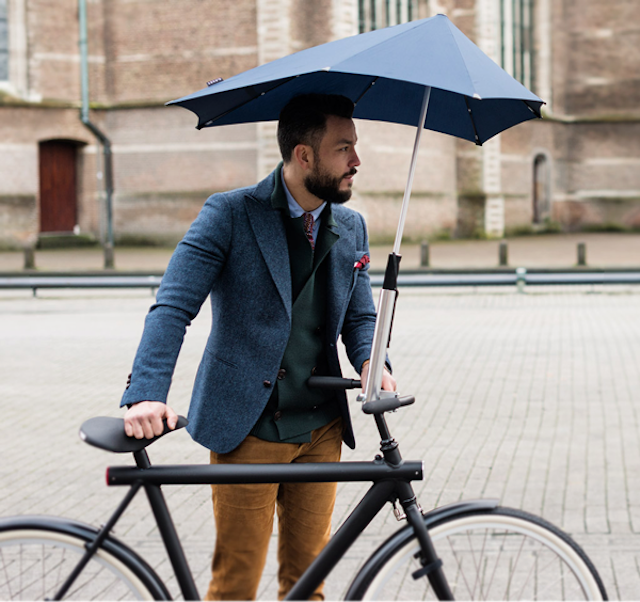 These funny-shaped, weather-proof umbrellas were invented here because they’re needed here. I mean, come on, it just makes Senz. (See what we did there?)

32. Join in on a random event taking place on the Dam square

From serious protests to frivolously fun pillow fights and bubble days, there’s a lot of random crap that happens on the Dam square. When you see it, jump in. At least once. 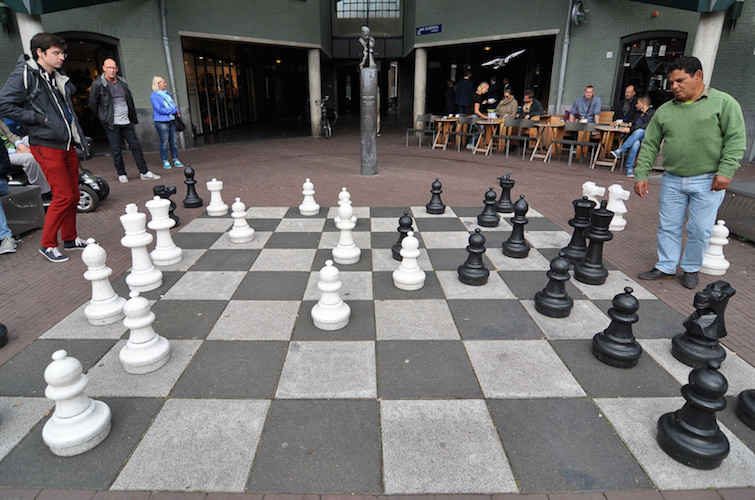 The most well-known spot is Max Euweplein, the Leidseplein-adjacent square named after the country’s most famous chess star. But there’s another set-up of the same size just in front of the entrance to the Tropenmuseum that’s never busy. Go there if you don’t want an audience or don’t want to wait.

It’s rowdy and it’s raunchy and it’s every Tuesday night at The Queen’s Head.

35. Eat at The Garlic Queen

The décor is a nod to the Queen (Mother, now). The menu is a love letter to garlic, with everything from garlic aperitifs to garlic ice cream. At the end of your meal they’ll give you a pin that apologizes to anyone who comes near you. You’ll want to wear it for the next 24 hours.

36. Drink a Walking Dead cocktail out of a flaming crystal skull at HPS

It’s like a zombie, but stronger and more badass. Have a second if you like. But don’t have a third, because the bar staff won’t let you.

37. Snack on a HEMA rookworst

HEMA may be the Kmart of the Netherlands, but they’ve absolutely nailed the delicious national smoked sausage. For some reason they also bother to sell really long hotdogs in funny circular breads next to this.

THE AMSTERDAM BUCKET LIST: 37 THINGS TO DO BEFORE YOU DIE (OR LEAVE)