This month, The Force Awakens hits theaters and it appears that, this time around, the galaxy far, far away is far from the man’s world it was when Darth Vader was running the show. Both sides of the Force seem populated with strong, badass women of all species.

But it’s not like the original trilogy was just one huge intergalactic sausage fest, either; those movies were bursting at the seams with amazing female characters. With Star Wars anticipation now higher than ever, we went back to the original trilogy — not the shitty re-issues with Greedo shooting first, and certainly not the lame-ass prequels — and scoured every frame to identify each and every woman in the galaxy. Then we ranked them based on their contributions to the story, badassery, and other criteria more confusing than all that crap about midi-chlorians. 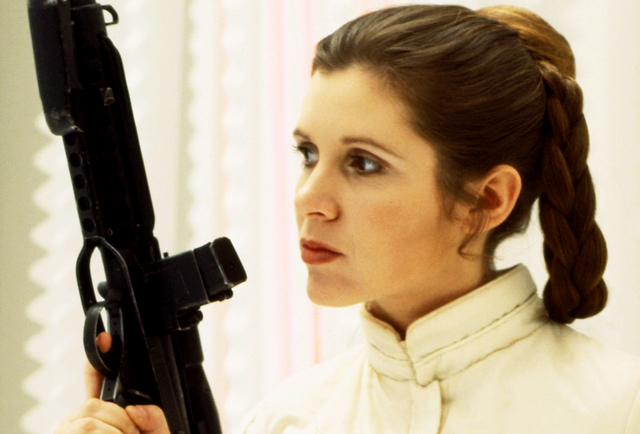 A New Hope, The Empire Strikes Back, Return of the Jedi
It was really no contest here. No, really, it wasn’t. She’s the definition of a badass, and a great leader. She can rock any hair style you throw at her (though her frizzy Endor hair wasn’t super flattering… blame the moisture). She starts out getting up in Darth Vader’s grill, commands the Hoth base, makes out in a space worm’s intestinal tract, and ends up being just as tough and effective as all the rebels, if not more. Also, she, um, talks. Which is a huge distinction here.

Return of the Jedi
Obviously, Mon Mothma’s been in the shit. That’s how you rise to the top of the Galactic Senate, son! Not just anybody gets to lead a faction of fish-faced pilots in a strike against the Death Star 2.0, and not even Lando questions her authority. It’s easy to picture Princess Leia growing into a very similar role (with better hair) in the franchise’s future. In fact, many fans (who are all, weirdly, named Andy Kryza like the author of this article) used to think she was Princess Leia’s mom, until Natalie Portman came and ruined that theory.

Return of the Jedi
With respect to the butt-headed Cantina Band, the Max Rebo Band is the greatest in the galaxy, thanks in no small part to the vocal stylings of Sy Snootles, that diva of liver spots and aardvark kisses. She’s got the gams of Tina Turner, the voice of Carol Channing, and the moves of an intergalactic James Brown. Too bad the band lost its recurring gig at Jabba’s palace after Luke & co. did their thing. But maybe the Cantina is booking?

A New Hope
Bringer of blue milk. Wearer of the finest outfits available at the Tatooine JCPenney’s rayon section. A woman so loved and cherished that Luke takes a full 11 seconds to mourn the death of his surrogate mother whilst gazing at the double sun. RIP, Aunt Beru. May all your milk be blue… in space heaven.

Return of the Jedi
Poor Oola. She danced like a tentacle-headed angel, despite her enslavement by a space-slug mobster. You’d think that, when the Rancor was hungry, Jabba would have fed it one of those weird pig-monster things, and not one of the very few women in his compound (and the one with the best dance moves). She deserved better.

6. The Good Women of Cloud City

The Empire Strikes Back
Look, do you really think Lando’s going to lord over a city without some ladies kicking around the halls? In a jaw-dropping feat of inclusion, Empire includes this shot of not one, but five women. They’re just kind of chilling and not shown doing much, sure, but here’s an interesting point: this is also one of the only scenes of the original trilogy that also features what appears to be a child. That means that, contrary to evidence to the contrary, the Star Wars universe isn’t stuck in a Children of Men situation. If that’s the case, the good women of Cloud City are single-handedly responsible for the re-population of the galaxy. Must be the Colt .45.

The Empire Strikes Back
This woman spends most of her time at the Echo base, looking at stuff (and looking at it very seriously), which leads me to believe she’s proven herself extremely valuable to the Rebel Alliance, especially since she’s — at this point — the only one without Cinnabon hair on the planet. Maybe, as they’re planning out these anthology prequels, she should get her own G.I. Jane-esque spin-off where we follow her though Rebel boot camp and watch her prove herself. Also, she’s totally playing Galaga, isn’t she?

Return of the Jedi
Wait, why is this woman — who doesn’t speak and who barely shows up as a backup dancer in Jabba’s lair — ranked eighth among every single woman in the original Star Wars trilogy? Well, we’re kind of out of women who appear in semi-sharp focus in the movies. Plus, we loved her in The Goonies. That was her, right? No? Shit.

What’s the Star Wars equivalent of grasping at straws?

A New Hope
The Mos Eisley Cantina is like myriad dive bars I frequent. Scum and villainy? Check. Dickhead bartender? Double-check. Exactly two women in the place? You betcha.

Return of the Jedi
So, let’s back-track. The women of Cloud City aren’t the only ones preventing the Children of Men scenario. There is also at least one baby Ewok, who shows up at the Ewok equivalent of a public-library story-time with what appears to be its mom. So we’re looking at a galaxy far, far away populated by Lando’s kids and Ewoks. Let’s hope that, in the time between Jedi and The Force Awakens, a Deep Impact-caliber chunk of Death Star debris fell on Endor and snuffed these things out.

Return of the Jedi
How much do you want to bet that she’s chilling in the background to avoid being duped into dancing backup for Max Rebo?

Just like Mysterious Brunette, this woman is steady chilling in the background. Except she has blue hair and a Little Mermaid costume. Which means reams and reams of disturbing fan-fiction have probably been written about her. Also, her appearance is so fleeting and background that she’s about as clear as a photo of Bigfoot. Which, again, reams and reams of fan fiction…

13. Woman (?) Wandering Back and Forth on Tatooine, Over and Over Again

A New Hope
The extras in A New Hope are a fascinating lot. Mainly because there are about 12 of them, and they wander back and forth, with no regard for space or time, in the background of every interaction. As far as I can tell, this is the only female extra milling about in the sandy, desolate wasteland. And she might not even be a woman. She’s always out of focus. She’s always hunched over. She… might be Gene Wilder? And she’s the 13th-best woman in the entire original Star Wars trilogy. No wonder Gloria Steinem’s a Trekkie.

EVERY FEMALE CHARACTER IN THE ORIGINAL ‘STAR WARS’ TRILOGY, RANKED

5 replies on “EVERY FEMALE CHARACTER IN THE ORIGINAL ‘STAR WARS’ TRILOGY, RANKED”

Don’t forget Oola gave us a nip slip too

Of course Leia is rank, look how old she is now.

It was in her contract: no competition

I always had a bit of a thing for Echo Base Map-Reading Woman.