Guys, remember when Facebook was just a baby? Back when it was literally called “The Facebook”? Obviously, it took some big sweeping changes and incredible innovation for Facebook to become the billion-user behemoth it is today. But those of us who’ve been paying attention these past 11 years might remember one or two lovable missteps along the way.

After a rumored “Dislike” button turned out to be “Reactions” (aka fugly emojis) that are still in the testing phase, we thought it was high time to take a trip down memory lane. Here are some of the oft-forgotten Facebook features that never quite caught on. 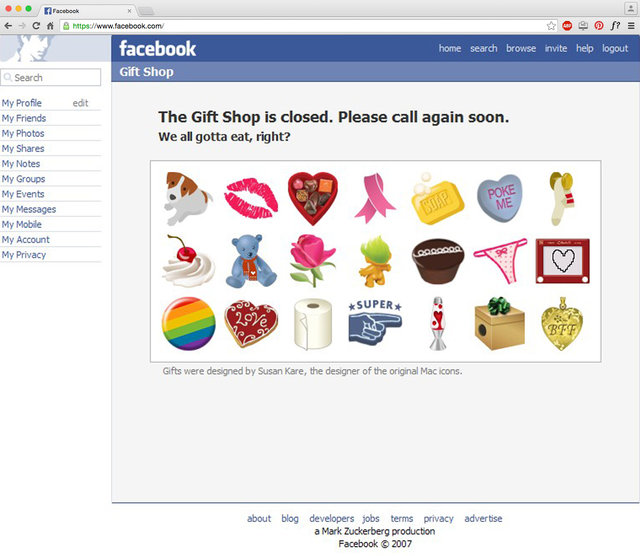 Years active: 2008-2010
People love to receive gifts. Actual gifts. Ones that you can unwrap, touch, and show off.

Which is why Facebook’s Virtual Gift Shop was such a bizarrely nonsensical concept. With very real money, you could purchase and send very not-real “gifts” — literally, illustrations of items that a less lazy friend would buy in real life for someone’s birthday, like Champagne or a cake. Or toilet paper.

Eventually, they expanded the program so you could buy real gift cards and credits, but pulled the plug altogether in 2012.

Years active: 2007-2011
Honesty Box was one of Facebook’s more intriguing offerings, especially if you happened to be in high school during its peak. One of the earliest Facebook apps, it allowed people to send messages anonymously, giving lily-livered coeds the courage to divulge their affection to their crushes from behind the cloak of a computer screen.

However, as much as Honesty Box was used for good, it was also used for evil. With no rules or limitations, it became a popular mechanism for cattiness and general douchebaggery at the dawn of the online bullying era. 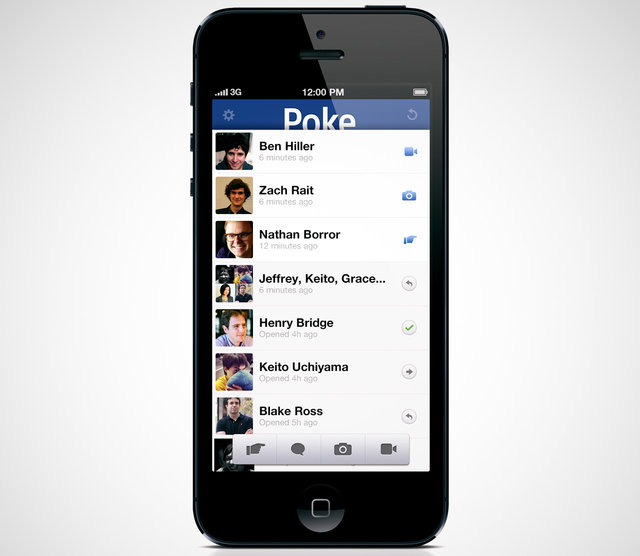 Years active: 2012-2014
Ahhhh, the eternally mysterious Facebook poke. No one quite knows what it’s for or why it exists, but it still does, and that’s terrific.

What wasn’t so terrific was Facebook’s standalone Poke app, which they teed up to be a Snapchat competitor, complete with one-time-view photos and video. It didn’t work, and when Snapchat turned down a reported $3 billion offer to buy the company, Facebook cut their losses and ditched the app.

Years active: 2012-2014
Before they purchased Instagram for a mind-spinning $1 billion in 2012, Facebook actually tried their hand at a special app that let you shoot, filter, and share your photos all in one place. Like Robert E. Lee, they smartly recognized they were fighting a fight they couldn’t win and instead just bought the competition to get the market advantage, eventually trashing their own version.

Years active: 2010-2012
Facebook Questions actually debuted six months after Quora, a site that’s literally dedicated to crowd-sourcing the answers to random questions, and a full five years after Yahoo Answers. Because it didn’t bring much more to the table (except some remarkably stupid queries) it really never gained traction, and was eventually removed from the site.

Years active: 2005-2008ish
Before the online dating boom really took off, Facebook served as a sort of de facto dating service by allowing users to select what they were “Looking for” from a dropdown menu. Included among the more traditional options were “Anything I can get” and “Random play,” which were eventually phased out — starting with users age 30 and over — much to the dismay of desperate dudes everywhere.

Years active: 2007-2009
Beacon was the grandaddy of all Facebook fuck ups. Once a pivotal part of their advertising strategy, it paved the way for what would eventually become Facebook Connect, allowing third parties to send Facebook data about users’ consumer behavior so they could better target ads.

However, Beacon was a veritable PR nightmare. It broadcasted what people were buying online onto their news feed without their permission, and became the subject of a class-action lawsuit over privacy concerns. More abysmal still, it was held responsible for ruining a bunch of people’s Christmases when it revealed what gifts they’d bought.

That’s right, everyone — Facebook stole Christmas. But the story ends happily in 2009 when good guy Mark Zuckerberg apologized, admitting that Beacon was “a mistake.” Aw. It’s cool man, no worries.

FACEBOOK’S 7 BIGGEST FAILS, INCLUDING THE TIME THEY RUINED CHRISTMAS

One reply on “FACEBOOK’S 7 BIGGEST FAILS, INCLUDING THE TIME THEY RUINED CHRISTMAS”