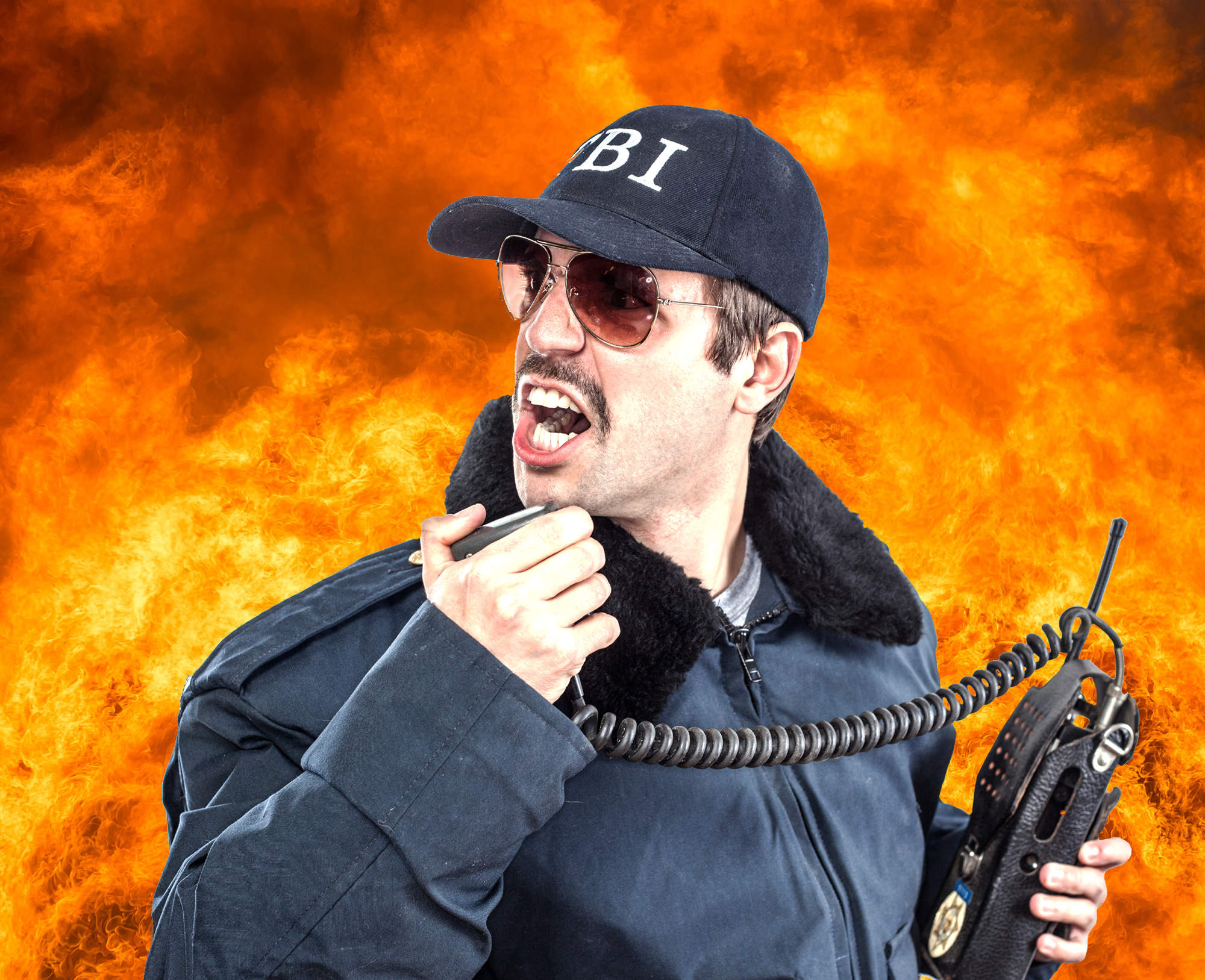 Talking to your boss about money is the second-most-awkward conversation you can have with your boss — the first being that time your date slapped his/her ass during the Christmas party conga line, obviously. I remember the first time I asked my boss for a raise. I rehearsed the conversation for hours in front of the mirror… but when I faced Mr. McGregor, I just threw up in my mouth and cried and actually got a pay decrease. And then I actually thanked the bald prick when it was over.

There’s got to be a secret to taking the edge when it comes to showing the boss who’s boss. So I found the most badass expert I could. Now, I’m not a particularly religious guy — so I don’t believe in Star Wars. That being said, when I ended my call with Christopher Voss, I had the lingering suspicion that I had just experienced Jedi mind tricks firsthand.

“High-stakes negotiation is emotional intelligence on steroids. Knowing how to negotiate correctly is a powerful tool, in any situation,” he told me in his cool, stoic voice.

If Liam Neeson’s character in Taken got kidnapped himself, the FBI would bring in a guy like Chris Voss — and Voss would have way better catchphrases, probably. An FBI agent for 24 years, by the time he left, he was the FBI’s lead International kidnapping negotiator. His training background is rarified: he claims to be the only negotiator trained by the FBI, Scotland Yard, and Harvard. He also teaches classes at Harvard and Georgetown, and now runs a negotiation-consulting company, Black Swan. He also has a dedicated Wikipedia page. Respect.

This is a man who made a living using his words to influence people, under the most stressful, dire consequences. And now, he makes a living teaching people how to apply this same high-wire diplomacy in everyday situations. I asked Voss to give me the rundown on asking for a raise, without vomiting, or even crying.

Give the boss the illusion of control

“The secret to getting the upper hand in a negotiation is giving the other side the illusion of control,” Voss told me.

“You don’t want to be struggling for control: it’s a complete waste of time and a common trap. With your boss, it’s a losing battle to begin with. If you approach the conversation correctly, you will gain control naturally.”

According to Voss, in any negotiation a competing side always will be asking: “What’s in it for me?”

Show him a bright future

Voss puts an emphasis on using “non-salary terms” in negotiation — meaning you shouldn’t tie your performance to money. “Pay me more, and I’ll be a much better employee,” is pretty much the worst approach you can take.

“Take the focus of the conversation off salary, and on to concrete terms that will make your boss want to pay you more. Give specific instances of how you’ve earned a higher pay already and will earn it in the future, regardless of compensation, and not the other way around.”

“The dynamic between hostage-takers and bosses is the same on several levels. When you walk into your boss’ office and ask him for a raise, you’re going to feel tension and anxiety. Any time you feel tension, you’ve been taken hostage on some level. You are afraid of losing something, and that feeling has taken you hostage. So, you need some hostage-survival technique: make sure the other side sees you as a human being. The more they recognize you as a human being, the more likely they are to treat you well,” Voss detailed.

“You need to tie everything back into the company’s future, and how you personally will assist its prosperity — do this by asking ‘how’ and ‘why’ questions. An excellent ‘how’ question is ‘How can I become more valuable to you and the company? How can I put you in the position to make the company more successful?’ Basically — you’re saying, ‘how can I make you pay me more money,’ without outright saying it. Or, asking something like ‘How do you think I’ve helped the company grow over the last quarter?’ Immediately, your boss will be recalling all of the positive things you’ve done. This will subconsciously put you in a positive light, in your boss’ mind.”

Voss refers to these types of question as loaded: they make the listener feel powerful, and it burdens the other side to make a decision and give out some insight… but they don’t perceive it as giving up any semblance of power. More often than not, the listener will play along.

This method is akin to the Ben Franklin effect — by asking someone to do you a favor, you give them a little slice of control and empowerment. People will like you better, because they feel like they did you the favor because they like you, even if that’s not the case. It’s a mind trick, for sure, and another instance of humanizing yourself.

“This makes people forget you are the actual source of the power, it gives them the illusion that they are the source. There’s great power in deference. The first thing hostage-takers want to do is have control, and they are mostly used to having to struggle to maintain that control. When we would come into a hostile situation, and give the illusion that we’re just ‘giving them control,’ it catches them off guard. It throws them off their game. It would be easy to use a similar tactic when dealing with an employer in that type of a situation. This empowers the other person: it makes them want to talk to you, in real human terms.”

Focusing too much on “yes questions” is another crucial error people commonly make, according to Voss.

“If you go into your boss’ office and say something like, ‘Haven’t I been a good employee?’ they’ll immediately put up their guard — again, rely on the ‘how’ and ‘why’ questions. Put the ball in their court, make them come to their own conclusions. Also, if you have any ‘land mines’ — problems your superiors have with you that you might not know about — this will draw those out. These are things you need to know about if you are trying to secure a raise. You’re better off, you’re smarter. You are in a better position to negotiate because you have more info.”

Though your salary discussions are decidedly low stakes compared to Voss’ dealing with international kidnappers, there are similarities in procedure. An example, you ask?

“Well, we were working a kidnapping in the Philippines one time. It was a lone serial kidnapper — this was a rare case. The kidnapper wanted a daily ransom paid — like a per diem — just to take care of the victim. We coached the brother of the victim to use ‘how’ and ‘what’ questions. Time-travel questions: ‘When we run out of money, what’s going to happen?’ This is a ‘when’ question and it’s also a deferential question. The kidnapper said, ‘Well, it will be alright.’ We backed him into a corner with a question, and he just promised not to harm the kidnapped victim. Which was critical. We got the intel that he didn’t have the intention to truly harm the victim, which changed how we approached the situation,” Voss said.

“I used this same technique with my own boss once, actually, regarding vacation time,” he continued. “He was upset with me at the time, and was going to revoke approval for vacation time that he had previously approved, trying to question the validity of the vacation request. So, I asked him: ‘When you originally approved this time off, what did you have in mind?’ He leaned back in his chair, and realized there was no way he could answer that question and still support his argument. If I just asked him ‘why,’ or tried to make an argument as to why I ‘deserved’ it, it wouldn’t have worked. I handcuffed him with his own words.”

“OK — think of sales vs. negotiation. They are kind of similar, but here’s the difference: a salesman will talk you into shit, a negotiator will make you talk you into shit. Listen to the other side’s words, and construct an outcome, based on what they said,” Voss told me, succinctly.

“Ask ‘how’ and ‘why’ questions, don’t use salary as motivation, defer power, listen carefully to what the other side is saying, and use it against them — in other words, don’t go in there with a script, play off of the information you are given. If you do all these things, you will get the upper hand in any situation.”

Be right back, I need to talk to my boss. And this time: I will NOT cry.

HOW TO GET A RAISE, ACCORDING TO AN FBI NEGOTIATOR

One reply on “HOW TO GET A RAISE, ACCORDING TO AN FBI NEGOTIATOR”

At the end of this two year cycle, either he gives you a massive bonus, a big pay rise and new title, or you repeat the process.