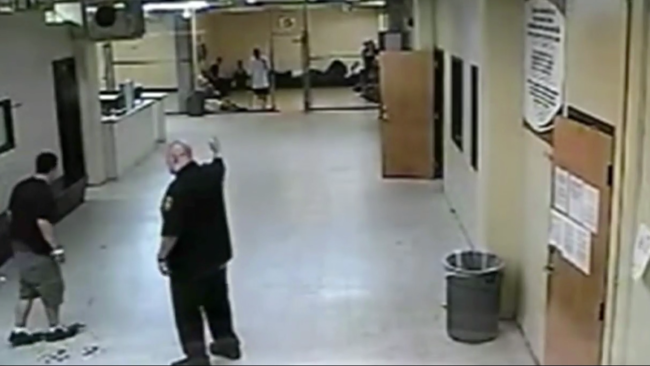 Chicago, IL – A veteran Cook County Jail guard who cold-cocked an inmate in an attack caught on video was spared prison Monday by a judge who called it “an act of indiscretion.”

Judge Lawrence Flood imposed a sentence of 18 months of probation on Rico Palomino, a law enforcement heavyweight champion boxer who was said to have an otherwise spotless record in his 15 years at the jail.

“In looking at the act itself, it was one slap or punch,” the judge said. “That’s bad enough, but it isn’t any more than that.”

“I really believe that if you could take it back, you’d do it in a heartbeat,” Flood told Palomino, who had about 20 supporters watching in the courtroom at the Leighton Criminal Court Building. “I believe it’s an act of indiscretion.”

After a bench trial in June, Flood convicted Palomino of one count of aggravated battery and two counts of official misconduct, all felonies. He faced a maximum five years in prison.

At trial, Palomino testified that he was defending himself against the inmate, identified as Rafael Aleman, but in finding Palomino guilty, the judge said the video clearly showed Aleman had his hands down when Palomino struck him once in the face, knocking him to the floor.

Prosecutors had asked the judge to give Palomino a sentence that would send a message to other law enforcement officers.

Aleman said he suspected that Palomino had used violence against other inmates, but he nonetheless was satisfied with the probation sentence.

“The judge made the right call,” he said. “As long as he’s not able to work (in law enforcement).”

The judge said Palomino is expected to be fired because of the felony conviction. He was suspended without pay after the June 2012 incident.

Aleman, who was being processed at the jail on a misdemeanor charge alleging he violated an order of protection, needed five to 10 stitches to close a wound in his mouth.

Prosecutors have described Palomino as about 6-foot-5 and 325 pounds, and said he towered over Aleman and outweighed him by about 100 pounds.

The single punch by Palomino was seen by sheriff’s officers who were doing a routine check of recordings from security cameras. The evidence was forwarded to internal affairs, which alerted the state’s attorney’s office.

According to prosecutors, Aleman left the bullpen in the jail’s Division 5 receiving area to obtain a phone number from property of his that had been inventoried. He stopped at a desk where Palomino was stationed to ask him where the property was kept.

As Aleman walked away, Palomino told him to return to the bullpen, warning, “If you don’t get back over here, I am going to (expletive) you up,” prosecutors said.

As Palomino stepped from his desk, Aleman turned around and started to walk back toward the bullpen, prosecutors said. But Palomino struck him in the face, knocking Aleman to the floor and bloodying his mouth, they alleged.

Prosecutors charged that Palomino threatened to report that Aleman had tried to escape if he didn’t say he swung first.