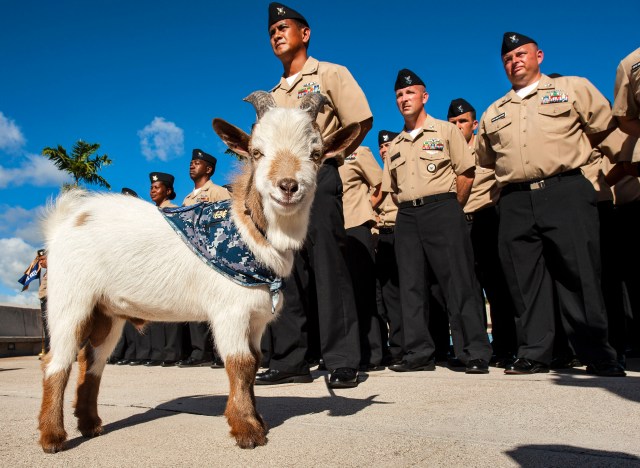 Master Chief Charlie is a pygmy goat who reportedly loves granola bars, and is ‘a hit with the kids’. He was first brought aboard the USS Lake Erie in Hawaii and stayed on the ship in transit to California, a potential violation of California’s livestock regulations and a lapse in judgement that has cost Captain John Banigan (commanding officer of the USS Lake Erie) his post. Capt. John Banigan was already under investigation before revelations regarding the pygmy party goat surfaced, and it appears Master Chief Charlie (the goat) was the straw that broke the camel’s back. Once news of the unofficial mascot of the USS Lake Erie made it to Navy Investigators they had no choice but to remove Captain John Banigan from command.

The saga of Master Chief Charlie started several years ago, as a joke among crew members, when they decided they wanted to name a ship mascot and a goat would be the perfect animal. Initially the crew wanted to get a stuffed goat but because they’re not pansies they obviously decided a live animal onboard the Ticonderoga-class guided-missile cruiser was a better idea. So back in 2012 the crew picked up the newborn pygmy party goat (not to be confused with Doug The Motorboating Party Goat who has his own Instagram), and he was immediately a hit with the crew and people touring the boat.

The Navy Times breaks down the saga of Master Chief Charlie, the pygmy party goat:

I started as a joke in 2012 by Lake Erie’s then-Command Master Chief Jack Johnson, who told the Erie’s chief selects they should get a goat as a mascot, a play on “goat locker,” a slang phrase for the chief’s mess.
Then-Electronics Technician 1st Class (chief select) Darren Wilks told Navy Times then that Johnson never really guessed they’d have followed through on it.
“We were initially thinking of getting a stuffed goat or something to hang in the mess,” Wilkes said. “But we decided to get him a real live goat. We thought he’d get a kick out of it.”
So, sure enough, the CPO selects acquired a newborn pygmy goat, which sported a white coat with black and brown spots. They issued him a tiny blue-and-gray Navy working uniform goat vest with a Lake Erie command crest patch midway down the back.
At the time Master Chief Charlie was christened “Jack” after the master chief. Navy Times was unable to determine when the goat’s name was changed to Charlie.
“It’s amazing how such a little guy like that has brought us all together, tighter than we originally were,” Johnson told Navy Times.
Well, the chiefs earned their anchors and the goat was kept on now-Chief Wilkes’ ranch, making the occasional appearance at ship events.
Fast forward to September 2014. The ship is departing Hawaii on a homeport shift to San Diego. The chief’s mess didn’t want to depart Hawaii without its mascot.
So they decided to make the week-long transit across the Pacific Ocean to San Diego with Master Chief Charlie tied up on the aft missile deck.
“It’s a pretty long transit and every time we’d walk by I’d be thinking, ‘Man, this goat is going to die,’ ” the source said.
But Master Chief Charlie, like a true old salt, braved the wind and waves and made it to his new sunny SoCal home.
When officials began reviewing Lake Erie’s command climate survey, it appears they were not amused to discover Charlie’s big Pacific voyage, which may have violated some Navy regs.

If this isn’t the quintessential Navy story then I don’t know what is. Straight up ‘boys will be boys’, only this time around it involves men taking in a pygmy goat as a pet, and keeping him housed on a US Navy Ticonderoga-class guided-missile cruiser (the USS Lake Erie). I fucking LOVE everything about this story.

Screw the people pissed off that there was a goat aboard, and calling this a lapse in judgement. Master Chief Charlie was a goddamn member of that crew, and he deserves to be with his fellow midshipmen. In order to try and get Master Chief Charlie back into service there’s already a Twitter account in place to raise awareness: @MChiefCharlie

California has strict livestock regulations, sure (from the Navy Times):

“According to California’s department of food and agriculture website, goats entering the state have to be examined by a veterinarian within 30 days before moving, be tagged or micro-chipped, and the owners issued a permit. The laws are similar for cats and dogs, though it’s unclear what the laws are governing enlisted pet pygmy goats.

What’s hilarious though is that Hawaii has the most stringent animal and livestock laws in the world, far more strict than the state of California. Here’s a list of Hawaii’s requirements for the importation of goats:

“Originate from a herd not under quarantine for brucellosis, tuberculosis, or other contagious diseases.
Test negative for tuberculosis and brucellosis within 30 days prior to shipment. (Brucellosis is not required for castrated males)
Dipped or sprayed thoroughly with an insecticide approved for use on goats at a concentration approved to kill ticks within 7 days of shipment. Include a statement – Free of external parasites.
Include a Statement-Free of external parasites.”

Sure that’s only for the importation of goats into Hawaii, and not for the mere existence of goats in Hawaii, but those regulations exist because Hawaii’s an extremely remote island and almost entirely free of animal disease due to being so far removed from the rest of the animals in the world. So I think it’s safe to say that Master Chief Charlie the pygmy goat is free and clear of disease. That doesn’t mean that the commander of the ship shouldn’t have followed regulation, but holy shit people, when did the pussification of America get so bad that our soldiers can’t even keep a pet goat aboard our Navy’s ships anymore?!?!

Just look at how goddamn cheery Master Chief Charlie is and tell me his quality of life isn’t better with his shipmates than it is anywhere else in the world: 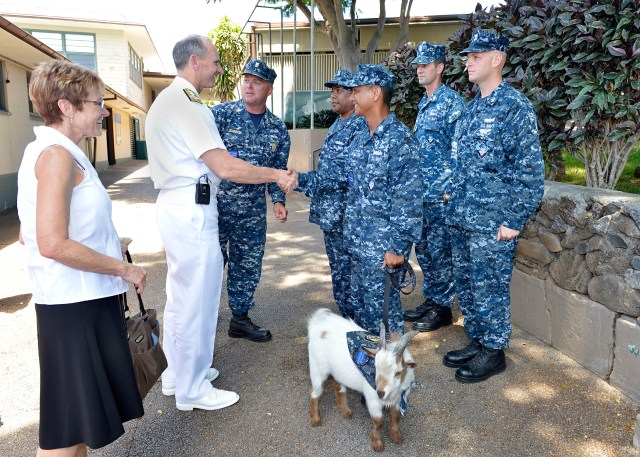 And just think on how good a creature like this can be for morale aboard a U.S. Navy ship:

That’s bogus!! I would have loved to have served under that CO! The last I recall, it was up to the CO’s discretion whether or not a ‘pet’ could be kept aboard a ship. When I was serving, we were pulling out of base one day, and one of the guys topside found a sea turtle hatchling crawling along the towed array fairing (I was on a sub, FWIW), and we kept it aboard on my watch station for the month-long underway. We fed it greens from the galley, and before long, the ‘turtle no one is to know about’ had far more visitors than a turtle that was to be unknown should have had.
For a long time, though, we tried to petition the CO to allow us to get a pet monkey for the engine room, so we could have a gopher for tools dropped in the (dry) bilge. No luck there, I think he was more a reptile guy.

I presume the logic was “Cheaper than a Thai bar girl and twice as tight.”