The public’s fascination with celebrities comes and goes in waves: last year everyone was obsessed with Chris Pratt and Jennifer Lawrence, whereas today people are jerking themselves off to photos of Justin Bieber and Gigi Hadid. Taylor Swift rode the hype train for a solid six months back in 2014 when her album came out, but since then she’s been laying pretty low…until Calvin Harris reportedly dumped her, that is.

While Calvin has come out to say that their breakup was at least somewhat amicable, people have been quick to assume that Swift’s next album will be a collection of songs dissing the famous DJ and their relationship. This is her MO, and possibly the only way she pulls inspiration for songs.

Regardless of how Taylor feels about it (and we’ll get to find out her opinion in oh, say, maybe a year from now? How long does it take to cut an album?), the Internet certainly had their opinions as Twitter managed to get the hashtag #IDumpedTaylorSwiftBecause trending, and boy did people roast the hell out of her:

#IDumpedTaylorSwiftBecause I fell in love with Trailor Swift instead… pic.twitter.com/0msatMSEDe

#IDumpedTaylorSwiftBecause I'm so vain, I'd probably think her next song would be about me…

#IDumpedTaylorSwiftBecause I wanted to hear what song she'd write about me

#IDumpedTaylorSwiftBecause I caught her writing me a note. Thought it was a break up song. Turned out to be grocery list.

#IDumpedTaylorSwiftBecause her dick was bigger than mine

#IDumpedTaylorSwiftBecause okay I'm not even a fan of hers and this hashtag is disgusting, she's a person too 😪

What’s next, we can’t make fun of a kid falling into a gorilla pit?

#IDumpedTaylorSwiftBecause no, I didn’t. I still have a pressing need to impregnate her and move on. Alas, it shall never be, unless she reads this and wants to hook up, even if it’s by USPS…

Now is your chance. Worst case senario, she writes a song about you.
Side note: I always thought the girl looked like an alien. Look at her eyes, they are too far apart. That’s why they take so many ‘side shots’ of her. So you don’t notice it as much. 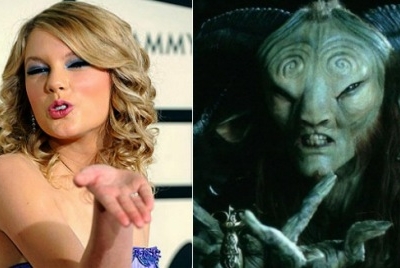