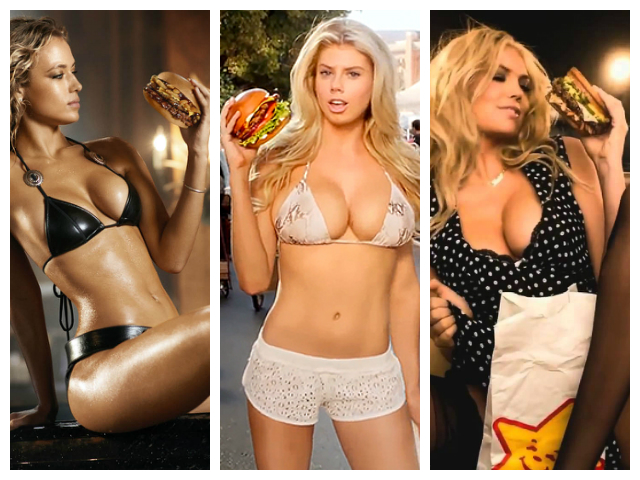 There may be no better ambassador of America’s favorite sandwich than Carl’s Jr. The burger purveyor has garnered much ballyhooed notoriety from their provocative commercials which feature some of the hottest models on the planet eating their juicy burgers.

We have ranked the top 12 Carl’s Jr. and Hardee’s advertisements by sexiness.

The Hills star Audrina Patridge enjoys a very Cali teriyaki burger with pineapple on the beach.

While the mesmerizing Marilia Moreno may not have donned a bikini, she still brought the sexy in this 2013 for the Western Bacon Cheeseburger.

The 42-year-old Heidi Klum gets her Mrs. Robinson on by seducing a younger man with a bourbon burger in this The Graduate-esque commercial.

Bodacious Wilhelmina model and Dancing with the Stars contestant Charlotte McKinney stars in the very bouncy “All Natural” commercial.

Paris Hilton was the pioneer of the sexy burger ambassadors Carl’s Jr. In 2005, the hotel heiress broke down the walls so that other hot models could eat burgers and get paid to be in commercials.

Not sure if this video of the sensational Hannah Ferguson washing a car had intentions of seducing me to buy a Texas BBQ Thickburger or to fap, but either way both urges were satisfied.

Back in 2012, when Kate Upton did actually did extraordinarily sexy stuff, she starred in this delicious Carl’s Jr. Super Bowl ad.

This isn’t even fair. Emily Ratajkowski AND Sara Underwood!?!? That’s two of the sexiest women known to man and they’re getting into a catfight over grilling space, only to kiss and make up? Game over.

These were all burger ads for Carl’s Jr., but they had other stunning models in commercials for fish sandwiches, salads and chicken sandwiches featuring Nina Agdal, Ashley Hartman, Jenny McCarthy and Kim Kardashian.

One reply on “Ranking The Hottest Models In Carl’s Jr. Burger Commercials Of All-Time”

Rather making me want a errrr, One or the other