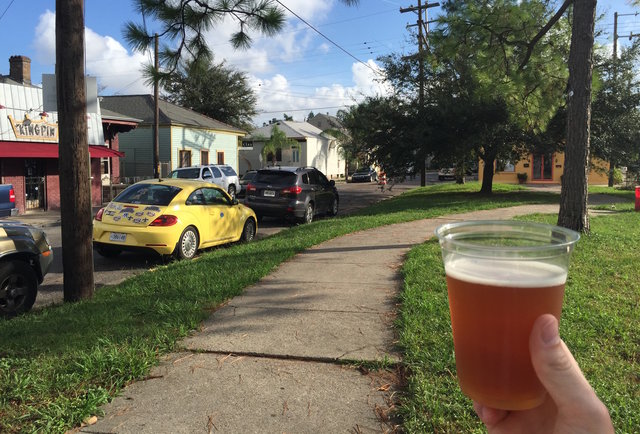 It’s almost become something of a joke about New Orleans culture: you can drink outside! Everyone is so over-served all the time! Did we even talk about the drinking? And where’s my HUGE ASS BEER, DAMMIT?! Yes, the Crescent City is known throughout the world for our wobbly mornings, boozy afternoons, and dancing-filled, devil-may-care evenings. It is a well-earned reputation, and we aren’t quick to deny it.

But why is that such a big deal? Why should the mere act of drinking outside be considered such a cultural touchstone? Well, the obvious truth is that it shouldn’t be. Out-of-towners fawn over it because they want to be able to do it, too. A recent poll confirms it, overwhelmingly. (In fact, those opposed to the idea almost fall into the margin of error.) 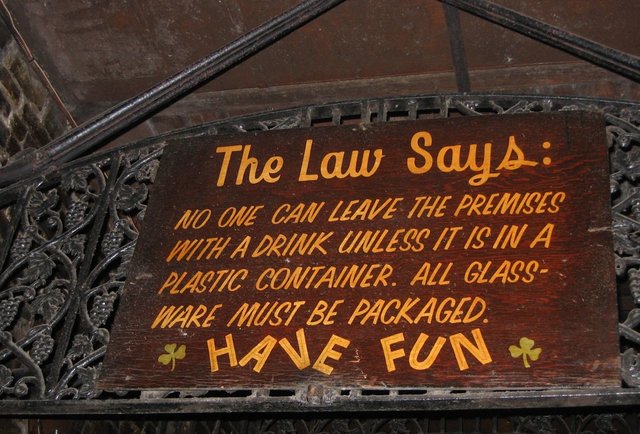 In New Orleans, the solution to the open container conundrum is the “go cup,” as in “taking your drink with you to go,” presumably to another bar, restaurant, or party. Local drinking establishments even provide these for you at the door, free of cost, because while you can openly imbibe from a plastic container or aluminum beer can, it’s still illegal to do so from a glass bottle. Like it or not, dem’s da rules, podnah. And it’s worked out pretty well for us so far.

How did the Big Easy land such an exemption from the nation-wide prohibition on fresh-air imbibing? Well, as it turns out there is no federal law banning outdoor drinking. In fact, as recently as 1975, drinking outdoors was legal almost everywhere. Open container laws are the result of dozens upon dozen of pieces of local legislation, and the rules vary between states, cities, and even the streets themselves. The history is quite fascinating. New Orleans didn’t pass a law allowing it. They simply didn’t ban it. 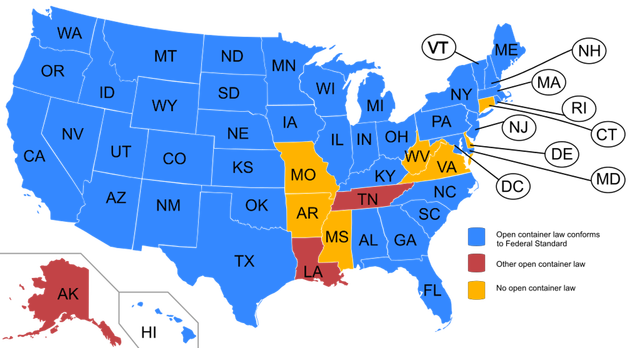 It’s here that we should also acknowledge that New Orleans isn’t the only municipality in the country to allow some form of blue-sky boozing — there are quite a few, in fact. But the NOLA solution might just be the best of all of them. We’ll get to why later. Before that, it seems like a good idea to just establish that drinking outdoors isn’t a menace to public safety.

You see, contrary to what many would seem sound logic, having go-cups and go-cup culture in NOLA appear to have done little to contribute to our levels of intoxication, compared to other cities. According to one prominent study (citing, among other things, statistics from sources like Experian Simmons and the US Centers for Disease Control and Prevention), NOLA didn’t even crack the top 13, with Boston taking the booze-soaked cake. And hell, man, you can’t even buy beer in certain parts of New England on Sundays. Talk about some seriously counterintuitive stuff going on here. Of the places in the US that allow some kind of public drinking, only one of them (Las Vegas, literally Sin City) is on the list, at #14.

And hence, the question of the day is: should the rest of the United States adopt NOLA’s pro-go attitude and allow open containers for all? I say yes.

First, some personal history: when I left New Orleans to attend college in St. Louis (#8 on that study), two things immediately stood out when it came to the drinking scene. First, obviously, no go-cups. This baffled me almost as much as the bouncer who couldn’t understand why I was upset that he was taking my beer away from me. Second, these kids had no clue what they were doing, pounding shots of cinnamon schnapps like it was water, much against my advisement that Aftershock tastes significantly worse on the way up, and it burns like a sumbitch while doing so. Having grown up in a town with a liberal attitude towards imbibing, and with a premium placed on doing so responsibly, I wasn’t that guy. I could easily tell when I’d had one too many, and I’d take care accordingly. Fact is, when you walk down Bourbon St during the late hours and see people partying like poets on payday, they’re not the locals, generally speaking. NOLA natives and longtime residents love our drinking — especially in go-cups — but we like to do so at a certain, Southerly, deliberate pace. As the saying goes, “it’s a marathon, not a sprint. Drink accordingly.”
So it does seem to make a certain sort of sense — at least from a New Orleanian’s perspective — that having go-cups in other cities, not to mention a focus on responsible drinking, might be a wise idea. Or maybe not. Maybe people in places like Atlanta would use go-cups as a cheap opportunity to get riggedy-wrecked, probably because they live in Atlanta (so you can’t blame them too much). But the evidence does not seem to support a causal link between go-cups and overindulging.

Another factor in support for USA-wide go-cup legislation is that it’s both economical and sensible, and actually encourages less binge drinking. Think about it this way: if you have a full drink and your pals are headed to another destination, in a no-go-cup situation you’re left to either abandon your poor beverage, or take it down as quickly as humanly possible as though the end is nigh. Neither seems like a civilized solution. You know what does seem civilized? Taking your drink with you, because the thought of orphaning it or slamming it just seems silly and juvenile.

This, then, is why the go-cup is such an elegant solution to the disparity between overwhelming public desire, and legislative roadblocking. It hits the Goldilocks zone between total outdoor drinking prohibition (which no-one wants), and total unfettered outdoor boozing (which has problems of its own). It’s easier for legislators to swallow because a go cup is just that — a cup. Not a sixer, or a bottle, or a keg of FourLoko. It’s a single drink, and the United States deserves one. Because, when it really comes down to it, drinking outside on a beautiful day is just so much more lovely and life-affirming and inspiring than crouching over your beer in a dark bar like a depressed troglodyte.

SHOULD THE REST OF THE UNITED STATES ADOPT THE GO-CUP FOR BOOZE?

One reply on “SHOULD THE REST OF THE UNITED STATES ADOPT THE GO-CUP FOR BOOZE?”